Last week was a very quilty kind of week!  Monday was the monthly Ocean Waves Quilt Guild meeting.  Instead of a speaker & trunk show, we had a full morning of sewing for our various Community Service Projects.   Community Service Sew In is something we do every year.  Some years every Community Service Group we sponsor is represented, and other years the chairman of the Community Service Committee picks 3 or 4 groups that could use a massive boost!  This year we focused on just 3 groups.  Don’t worry, we are still supporting the other groups all year long!!  This was a great day to pick a project and sit and sew. First I worked on blocks for Quilts of Valor (QOV).  When QOV ran out of kits, I picked up a kit from the Quilts of Love table and set to work on it.  Silly me, I forgot to take any photo’s of the QOV blocks.

Before you knew it, time was up, and I hadn’t finished my little baby quilt.   (I must have been chattering too much!)  I took the kit home and finished it up last week.  I love the organization involved with preparing all the kits for the guild members to work on.  This was a cute and fun project to work on! 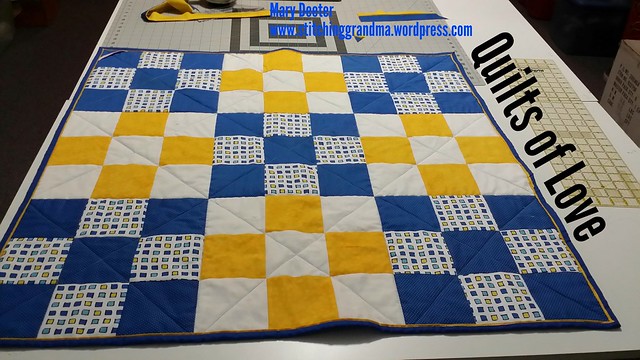 I chose to do a simple straight line quilting across the quilt instead of tying the quilt with floss.  I also chose to make my own binding, using Susie’s Magic Binding method.  I pulled some bright gold yardage out of my stash, but had plenty of the blue backing to get the needed strips for the binding.  The backs were oversized  for a “no binding” style quilt, but I much prefer making my own.

While I was working at home, on this little quilt, my Janome 8900 started skipping stitches.  I did everything I could to fix the problem, and finally gave up and switched to my “little” Brother CS6000i, to finish the binding. I took the Janome into the shop on Saturday morning for servicing, when my efforts were unsuccessful. I had “re-threaded”; “cleaned the bobbin case”; “installed a new needle” ; “wound new bobbins,” “re-threaded again” etc.  The top thread was getting hung up in the race, and I could see where it was catching, but couldn’t figure out why.  No amount of head banging was going to fix the poor ol’ girl.

While at the shop, I took a photo of the inside of the bobbin case on the floor model.  The first picture is the shop’s floor model (which needs some cleaning I think!).  See that area I circled in red.  Well look at the little red arrow, and then to the left of it.  That’s what it SHOULD look like. 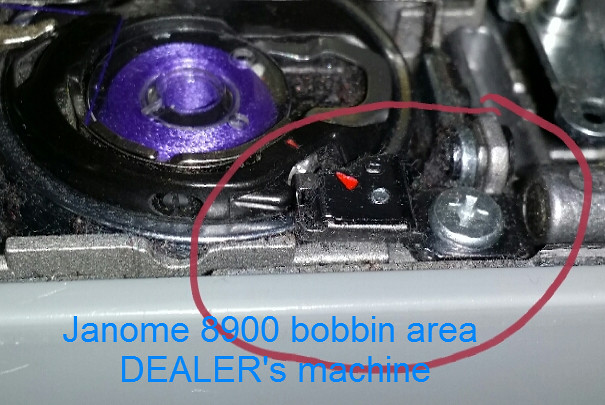 The picture below is MY machine, and now look at that strange thing next to the red arrow! 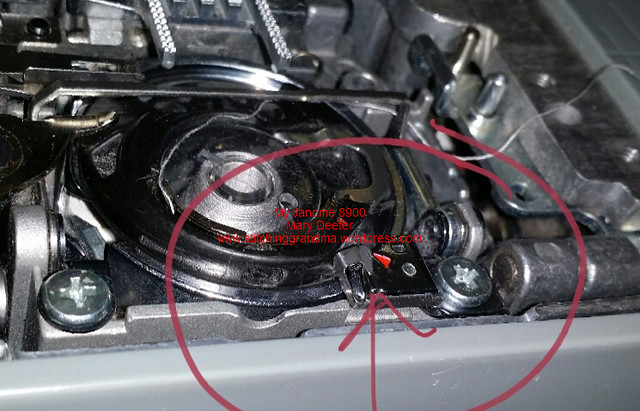 That little hook near the arrow I drew was catching everything.  How in the world did it get up above the bobbin case ???  Definitely what my thread was hanging up on!  Because I couldn’t find any “close up photo’s” of how it “SHOULD BE”, I couldn’t explain to the hubby what was wrong.  He would have dissected the machine and attempted a repair.

Now, here is a question for you………….How often do you clean your bobbin area?  Do you always take out the bobbin case and clean underneath? Do you use a brush or canned air or a mini-vac?

I’ve had one friend tell me the repair shop told her canned air is ok to use, yet on many websites, I read NOT to use it, as it could add moisture around electronics and / you can blow lint back into place you just can’t reach to extract it with a brush or tweezer or vacuum.  So, what’s the real answer???

Meanwhile, the machine is down and out for the count for at least a week or maybe two.  I had my 2 blocks to catch up on from Pat Sloan’s pattern – Grandma’s Kitchen.  Once I got over my machine repair angst and got the blocks cut out, I got busy sewing them.  For some reason, I did block 7 first.  I fussy cut the centers of the stars.  I’ve seen lots of these blocks done on-line this week, and lots of variations with color placement. 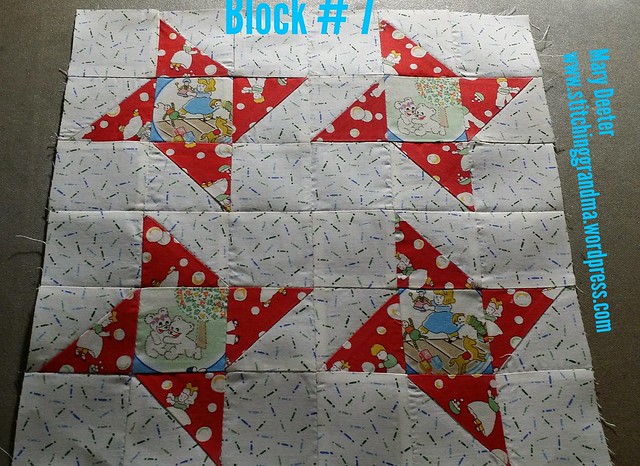 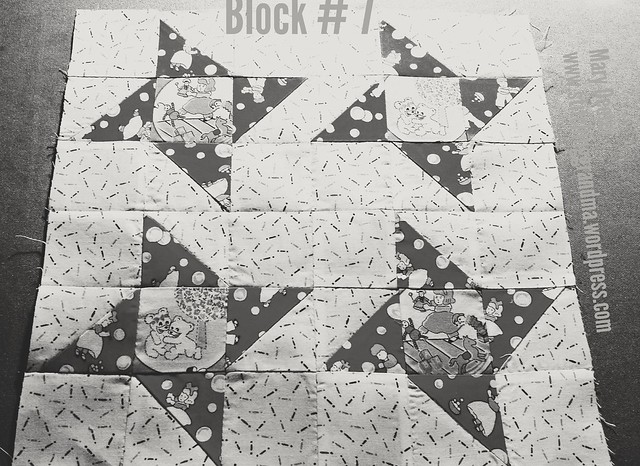 Pat Sloan called this her “Oh My Stars” block.  Famous words from a grandmother.

Block 6 is called “Wash Day“.  This block gave me trouble, only because I chose not to read the directions; when sewing the half square triangles (HST) or assembling the block.  (NOTE to self; after fighting with the machine, and working LATE, give it up and stop for the night!)

I had a great “fat 8th” of laundry on the clothesline fabric in the 1930’s reproductions.  Well, let’s say this – I have now got a container of “WHOOPS” blocks.  I ended up going back to the red from block #7 for my dark, and was only able to use one square of my clothesline fabric as the center square.  (INSERT SAD FACE HERE).  I decided when all was said and done, you would not be able to tell what the fabric was representing, as the piecework is so small ! And, I used up what I had, so (INSERT SAD FACE HERE).  I was “hoarding’ that fat 8th since I bought it 3 years ago…………it was something I had not seen before, or since.

Anyway, back to the red for the inner star, those circles look like soap bubbles, right??  I had to recut to make those red and blue HST’s, and the red and white HST’s after I discovered I screwed up!  At that point, I decided to lay out the block and call it a night! 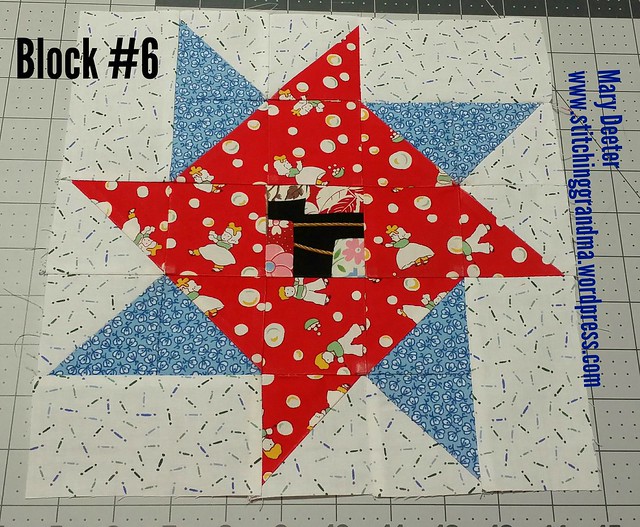 I was a little apprehensive using the blue for the medium, but in the B&W photo below it really works. 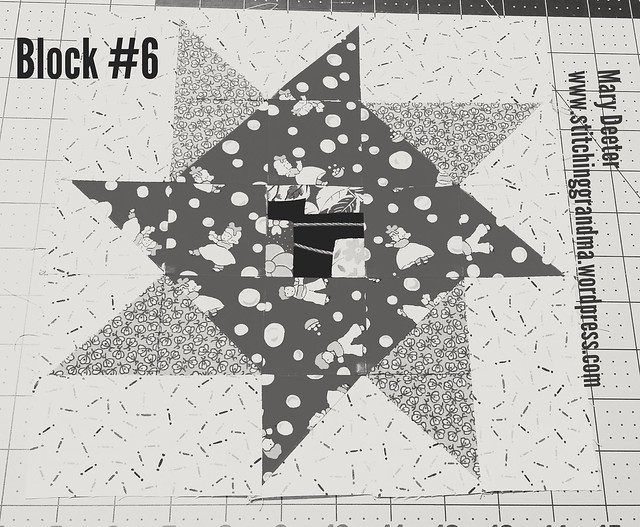 So, I am caught up with the Pat Sloan – Grandma’s Kitchen for now, even using the back up machine.

Here they all are: 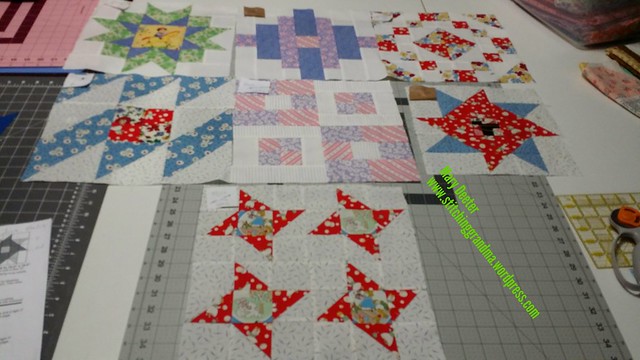 Thinking ahead to getting some more of that great yellow and green into one of the next few blocks!  Oh, and those black and whites I have pulled out with scottie dogs….

I went on an internet search today for the little bit of clothesline fabric!  First I searched at a place Bonnie Hunter had recently visited on a trip to Minnesota – Reproduction Fabrics – Northfield MN, but no luck.

So, I dug in the “dog bed stuffing pile” and pulled out the selvedges.  I tried a new search tactic.

So, THANKS to Two Bees Fabric of Texas for having the Sara Morgan Circa 1930 for Blue Hill Fabrics . 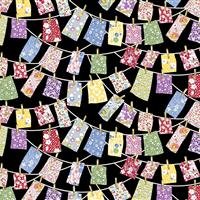 “Two Bees Fabrics – you will find the traditional 1800s/Civil War reproduction fabrics along with the 30’s depression reproductions.  Look for the French influenced floral and toile fabrics too.  “

So now, I have this “snippet (30+ inches) of fabric” coming by mail and I will hoard it again until the “right block” presents itself.  I do hope Pat Sloan will give us a couple of blocks that will show off the larger prints in this pattern. If not, well, back to the 30’s bin it will go for future use.

There you have it, the drama of the (insert sad face) sick sewing machine, and the multiple attempts at building block 6, along with the JOY of knowing I could get another bit of the clothesline fabric.

While I was at the Delaware Sewing Center store with my machine, I grew slightly overjoyed that I purchased my Janome 8900 when I did, as the price has gone up by $1000 since I purchased it in 2013.  (How does that happen??)  The sweet lady in the store did her best to sell me on one of the machines that had a feature “she” loved….but the throat of the machine was too small for me.  I just hope the cost to fix the machine is not too high. Keep your fingers crossed.  Meanwhile, I will slog away on the ol’ Brother CS6000i.  If it irritates me, I will bring my traveling Singer Featherweight up stairs to sew on.

15 thoughts on “A Good week for quilting”