PART 4  of my travel stories.  The cruise was from April 14 – 24th, 2018.  Picking up again, still sailing the western coast of Mexico on the Ruby Princess. This was a 10 day voyage with 5 ports, and 5 sea days.  Last port to visit was Puerto Vallarta, Mexico!

I’ve kind of “been there done that” with excursion on the 13 cruises I have taken on Princess, and on cruises with Celebrity, Oceana, Carnival and Norwegian.

My first visit to Puerto Vallarta was on the Golden Princess in 2008, and we had multiple cabins and lots of friends and family along. Everyone decided to do different activities when we ported in Puerto Vallarta.  Hubby and I and one friend had a “wild taxi ride” around Puerto Vallarta with a young driver who failed to listen to the info provided at the port by the tour guide.  Took a lot of good humor to get past that adventure and on with a nice time riding horses in the canyon.  Picture below is with my hubby and my friend Chris!

My next visit was in 2012, and we arrived on the Sapphire Princess.  I had booked a Gray Line tour to a tequila factory up in the mountains.  What a nice tour….except the part about getting back to the ship late and running for the gangway.  That put my sister off from doing excursions that were NOT ship trips! I figured she might be right with a track record of 0-2, so opted to “stick with cruise line excursions.

So, last fall, when we did our Panama Canal transit on the Island Princess, we booked a “Viva Tequila” excursion through the ship.All I can say is this was a TERRIBLE excursion, especially with folks who had limited mobility.  (Boy did Princess Cruise Lines hear a lot about that from me!!!)  The excursion was so bad, we bailed out, and took a taxi back to the port, with a brief Wal-Mart stop (the highlight).  (Seriously, the show that they did at the Viva Tequila location was quite good, the rest of the logistics…not so much) 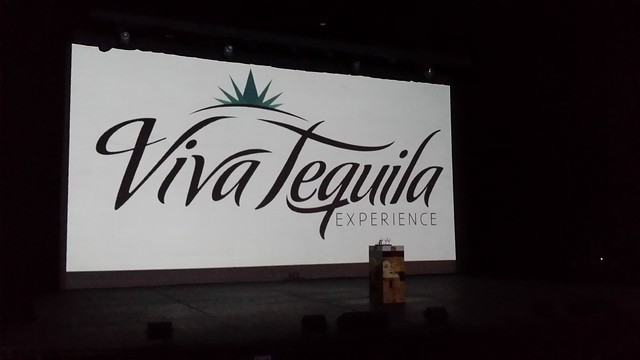 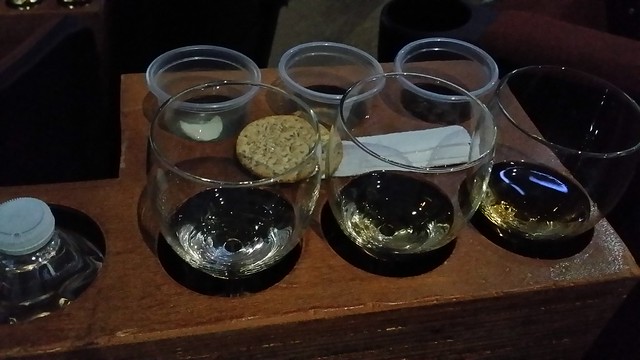 So THIS trip…what to do was a big decision.  Stay on the ship?  No way….I am always ready for an adventure.  I paged through the excursion lists and settled on an activity that included breakfast, lunch, booze, beach, and a sailing ship.    As the title of this post indicates…even 2 months later…it was the BEST excursion ever!  After looking over the details, and talking to the excursion desk, my sister cancelled out on the day, because of her limited mobility.  I however, hung in for the FUN.  Fourth trip to Puerto Vallarta, and I wanted to be “on and in” the water! 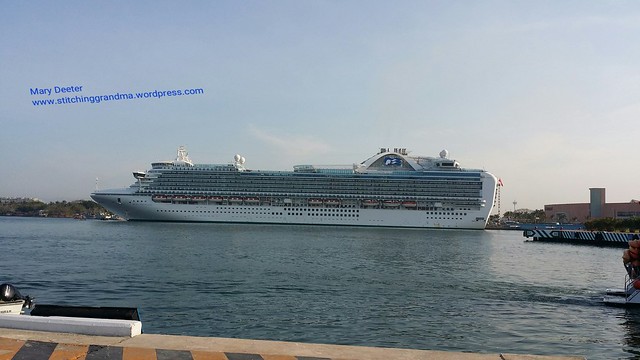 In the photo above, you can look across the harbor at the Ruby Princess docked opposite where we have always docked in the past.  The area near where I was standing is all under reconstruction.  (The other dock is MUCH closer to the street and easy walk to Walmart…..)

When I first disembarked the ship in Puerto Vallarta, I was met by a travel guide and grouped with about 10-12 other folks.  As soon as the head count was taken, we were assigned our own “personal pirate” for the day!  Our “personal pirate” was named Poison, and he was going to take care of us for the duration of the trip.  Wow, did he ever!  Before we even arrived at the sailing ship, he had organized our choices for breakfast and lunch, posed for photo’s and made sure we had everything we needed. 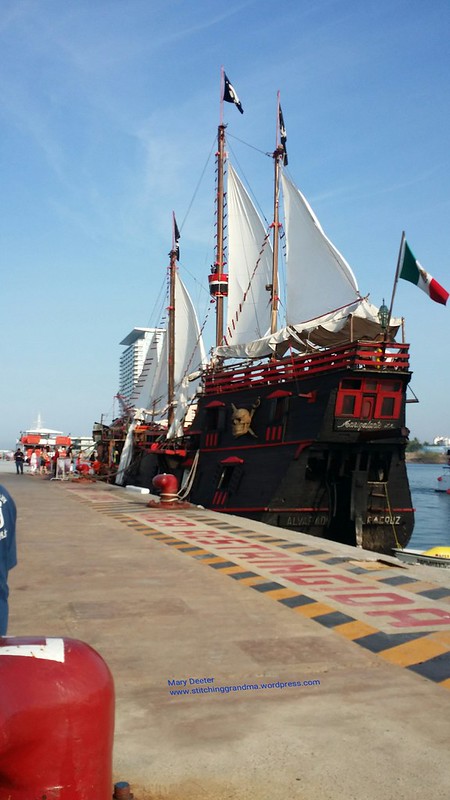 As we boarded the ship, he assisted each of us on board, directed us to seats, and hurried off to get drinks for all.  When it was time for breakfast, he escorted us “below decks” to the galley for our fantastic food. He served coffee & drinks and sat and chatted with everyone at our tables. We had our choice of a “Mexican Breakfast” or an “Americano Breakfast”. I chose to enjoy the Mexican Breakfast which was wonderful.  (For the record, my sister was right to cancel, because there was considerable climbing of steps and ladders in this ship!)  My personal pirate,  Poison,  was a young guy, 19 or 20 years old, very fluent in English, and covered in ink art, to include his name on his neck!

This excursion was on the Marigalante Pirate Ship, and we were under sail the entire day! 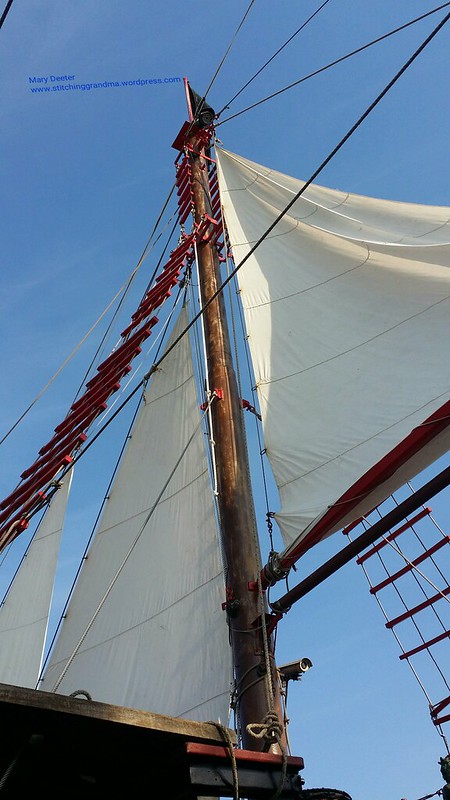 Entertainment was constant on this vessel, with a great show performed by the crew, to include a mutiny, and cannon shots, and pirates going overboard. 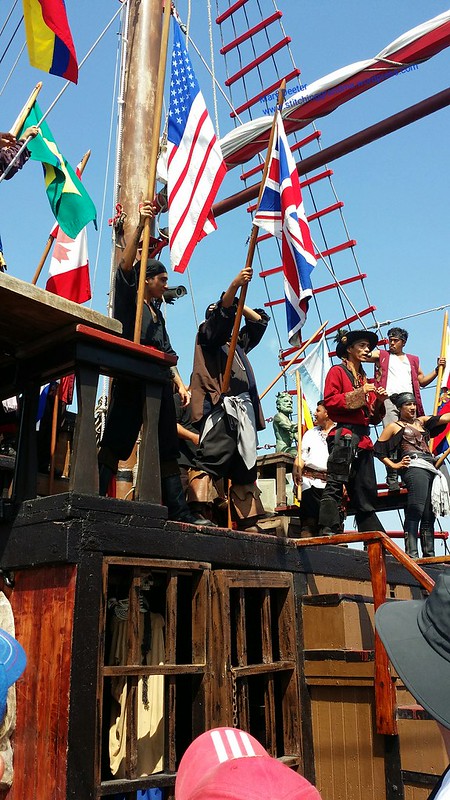 It was all fun and exciting, and the crew got the passengers  into the fun. 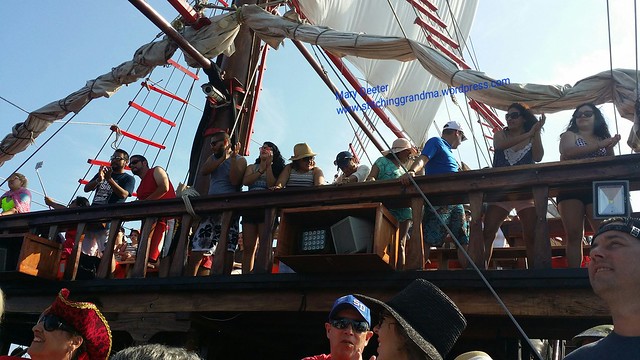 You had to get up and dance! 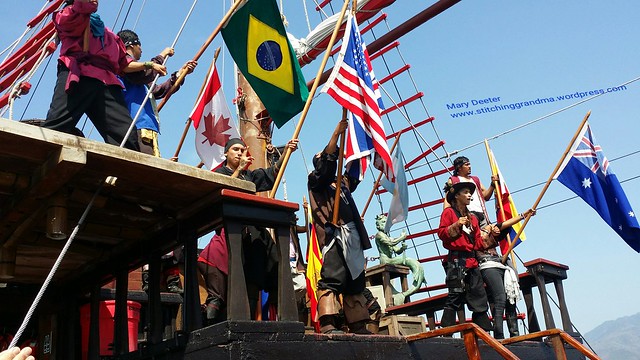 We transferred over to a smaller craft for transport to the beach and back from this sailing ship.  Once on the beach, drinks were also unlimited.  Getting off the ship onto the smaller craft was not for the faint of heart, as we descended a ladder to a floating dock and stepped into a small boat.  On arrival at the beach, we got ourselves over the side of the boat and into the water.  All this while barefoot, so we had better grip on the steps etc.  We did the reverse returning to the ship. 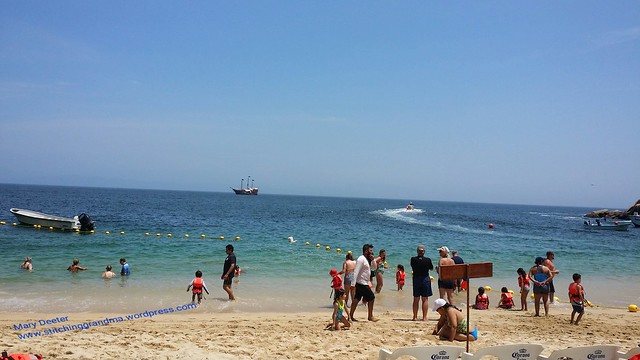 The cove that we went to was wonderful.  They had games for the kids, a banana boat ride, and even a mermaid hidden in a smaller cove!  I liked that they took the kids in big groups to look for hermit crabs, and eventually to find the mermaid! 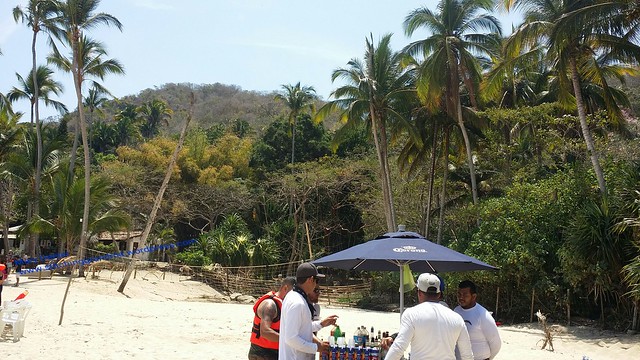 Did I mention unlimited drinks??  Served by pirates of course!  My personal pirate POISON kept my glass full! 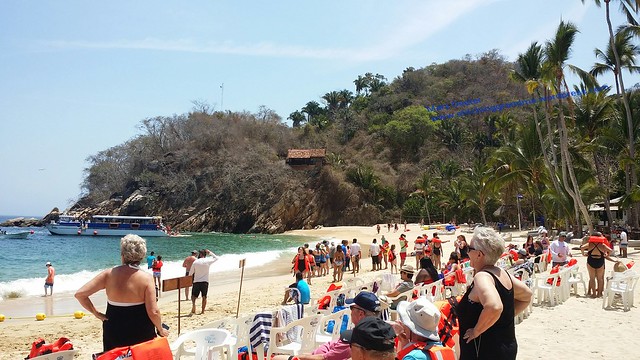 These “pirates” stayed in character the whole day! 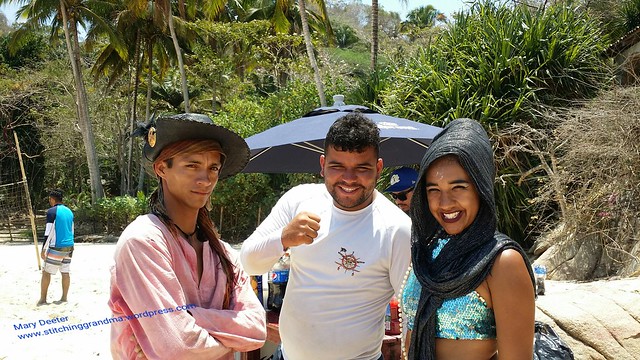 That lovely mermaid was also the Pirate Wench too!

On the return from the beach, they had everyone on board practicing their best pirate skills –  ARRRGGGH ! 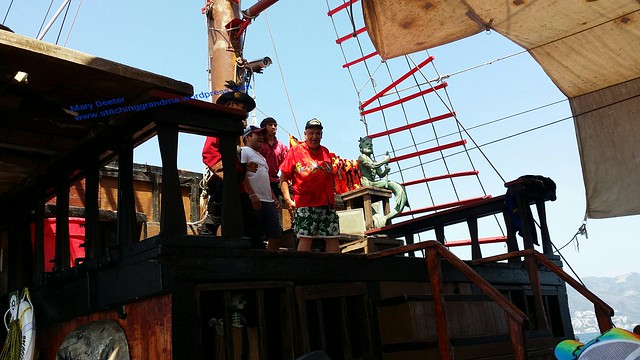 The man in the shorts & red shirt did his best to sing while he had a throat full of tequila!!!  He wasn’t as successful as some of the YOUNGER men, but he was still having a great time!!  There were LOTS of games and fun, music and dancing, and a fantastic lunch as we sailed back into port.  Of course, we did the YMCA……and they had EVERYONE (Yes, me too) up and dancing as we sailed.  (There was an Australian man with his family sitting in front of me, and he had broken his arm in Cabo San Lucas on that excursion I didn’t take…..he didn’t cancel out on this adventure, although he was unable to climb down the ladder and go to the beach, he did seem to be enjoying the dancing and drinks as we sailed.) 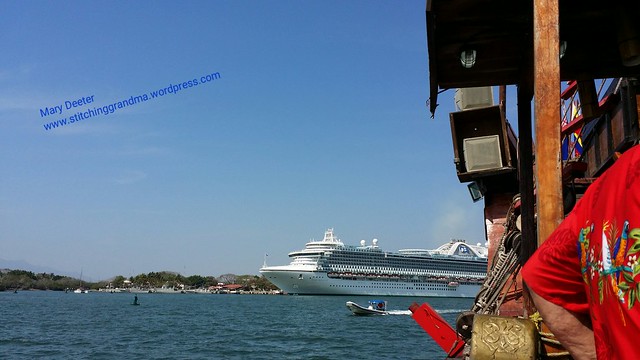 I am certain we were all acting like pirates as we came into the port!   AAAARGHHHH………What a FUN day!

If you EVER get to Puerto Vallarta, for a land vacation or a cruise, plan to take this excursion.  Link to the website & Facebook page at the end of the post!!  Go with a sense of humor and a willingness to act silly and have fun.  (Be ready to eat & drink and dance too!)

After we disembarked and were walking back to the Ruby Princess, I spied something on the rocks!

Can you count five in the photo below? There are large and small iguanas on the rocks.

Apparently these little guys like the sunshine and the shade. 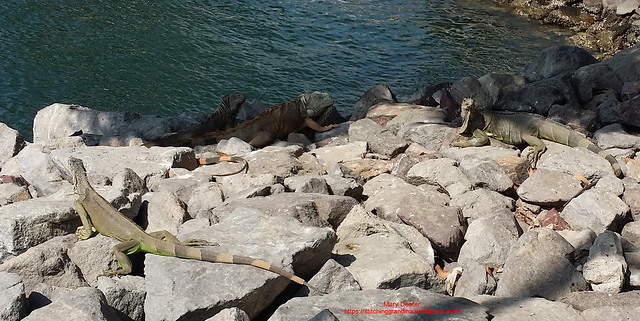 I love the colors of these creatures.  They had orange on their tails. 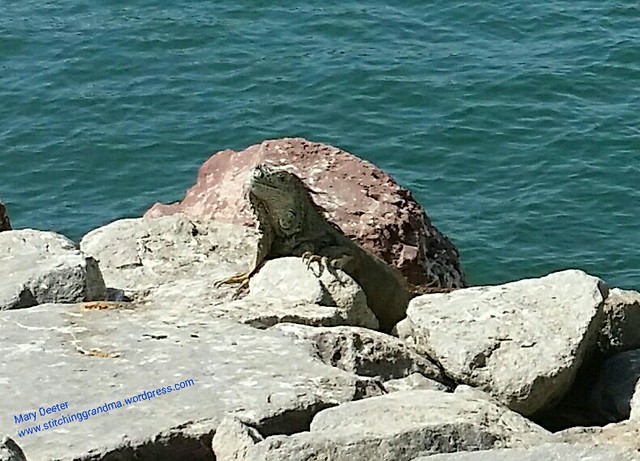 If you want to see more of  my photo’s from this trip, check out my Flickr album 2018 Cruise Ruby Princess photos

Wrap up — in my opinion, this was the BEST excursion ever.  For more details, use the links below.

Back to quilting soon…………..I promise!

4 thoughts on “Travel Stories – part 4 – THE BEST Excursion ever!”