In order not to bore you to death, I will break up my posts. (Besides, I have lots of photo’s still to sort through.)

I returned this past Sunday from nearly 3 weeks of travel.  I thought I would share a few of my travel memories.

Our 10 day cruise began in San Pedro CA, then to San Diego CA, and on to the Mexican ports of  Cabo San Lucas, La Paz, Loreto, Puerto Vallarta and back to San Pedro CA.

I’m sharing a map so you can pinpoint our itinerary.

Before we sailed from San Pedro, I got to visit with my sister Cathi, who met us for breakfast and took us to the port! She lives in So. California and happened to actually be there.  She is usually on the road, so it was a nice way to start the trip, and my birthday!  I haven’t spent time with her in quite a while!

That is our ship, the Ruby Princess in the background.

We were onboard the ship within 30 minutes of Cathi pulling up to the port.  This was my 4th time on the Ruby Princess, so finding our way around was pretty easy.  Anne had chosen a window cabin on deck 5, just around the corner from the International Cafe and COFFEE !!  Great location on the ship! 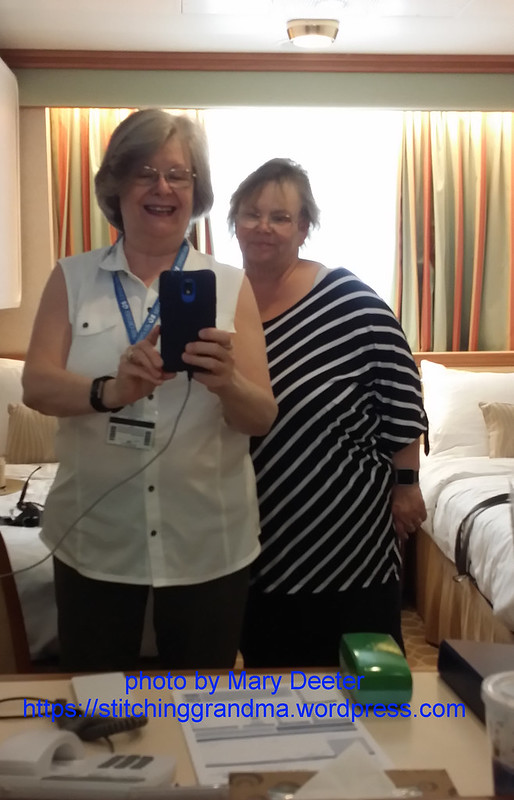 It didn’t take long for us to dump our carry-on items in the cabin and find our way to our FAVORITE spot on the ship! 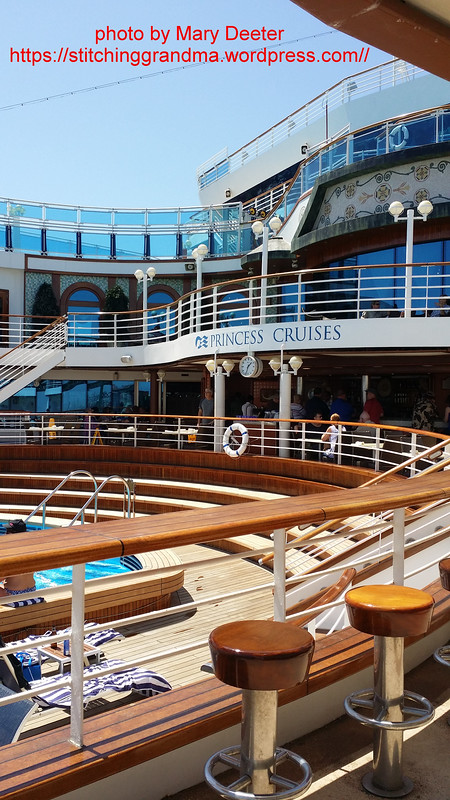 We like this spot on the aft end of the ship because we can watch the port happenings and the busy waterway. 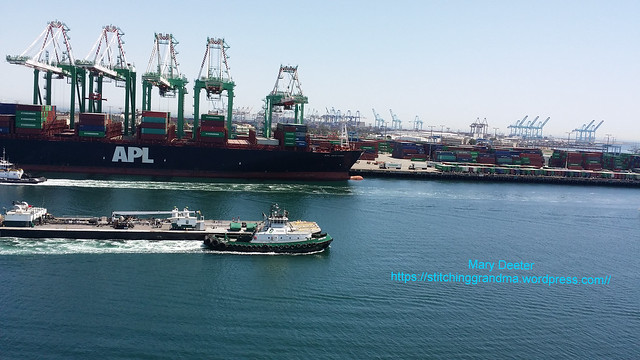 and of course, there is a bar close at hand.  Perfect spot for sailaway! 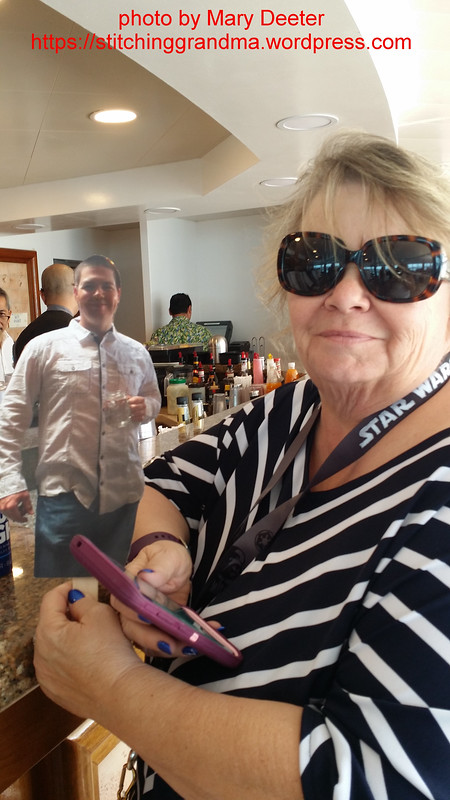 My sister, Anne, brought along a travel buddy – Little Zack –  he wanted to stow away, but she let him out of the baggage!  Lots of folks at the bar wanted to know about Zack. He was a great conversation starter!  I think 2 of the bartenders signed the back of Zack too.

We had a meet & greet (informal) with some folks from Cruise Critics shortly after the “MUSTER Drill”.  This is the first time (in more than 17 cruises) we haven’t had to drag our life jackets to the MUSTER Drill. What a relief.  Our luggage arrived in our cabin within an hour of our embarkation, and we were unpacked before the MUSTER Drill. (That’s also a first).  We had early dining (5:30 pm) and met our lovely table mates whom we would dine with for the duration of the cruise. A table for 8 is a nice size, easy to “move around” nightly, sitting next to different people, and getting a chance to get to know each other. I’m not a fan of the early dining, but you do finish in time to catch the sunsets!  Late dining is too late.  Other cruises we have done any-time dining, and you never know how long you might have to wait for a table, or whom you might share the table with on any given day.

We sailed overnight to San Diego Ca. We had no specific plans. I wanted to take the Seal Tour, and Anne want to find local microbrews.  We were able to take a free shuttle bus from the dock over to Sea Port Village.  We ventured into  The Headquarters  a 1939 Police Station and took a few photos. 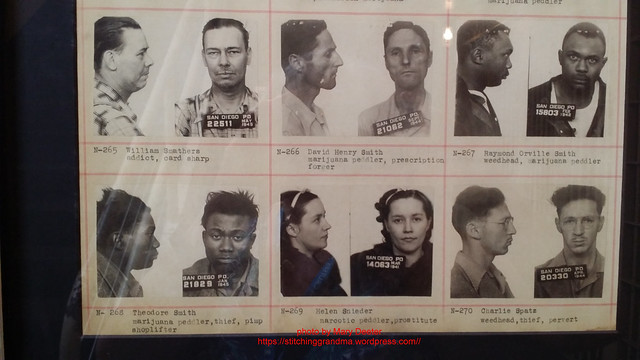 We both served a little “time” in the police station lock up!  Just wondering what our “mug shots” would say!!! 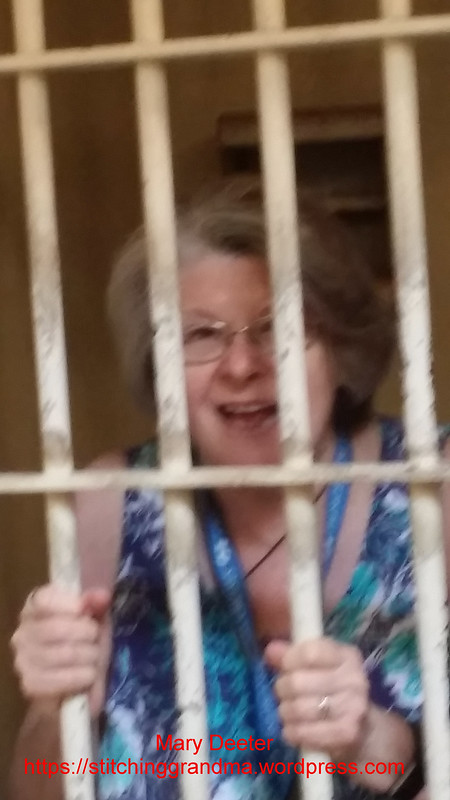 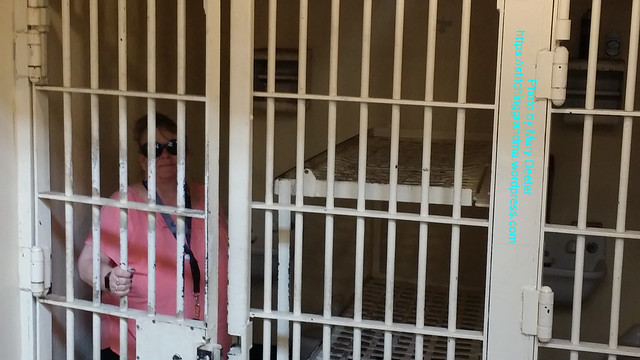 “WILD SISTERS – wanted for having too much fun” or something on an early Sunday morning! 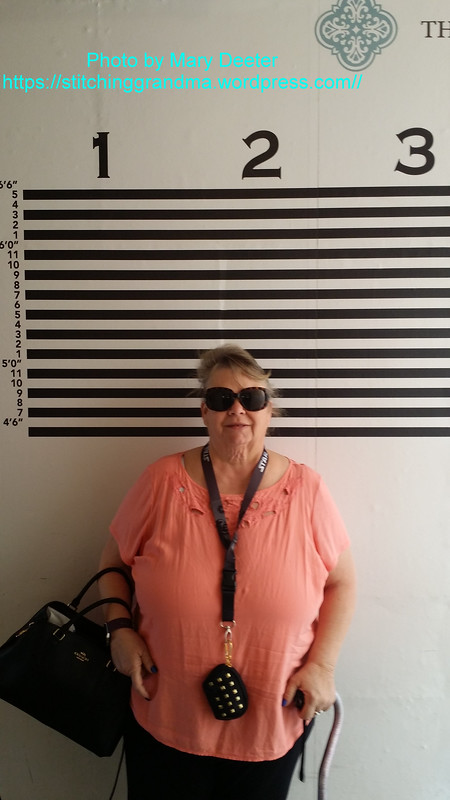 Not sure if my sister took a photo of ME next to the lineup wall, but if she did, I would be the “TALL” one….lol…..

The San  Diego Sea Port Village is a pretty place to wander around, shop, eat and play!  Definitely designed for walking, browsing, sitting and people watching. 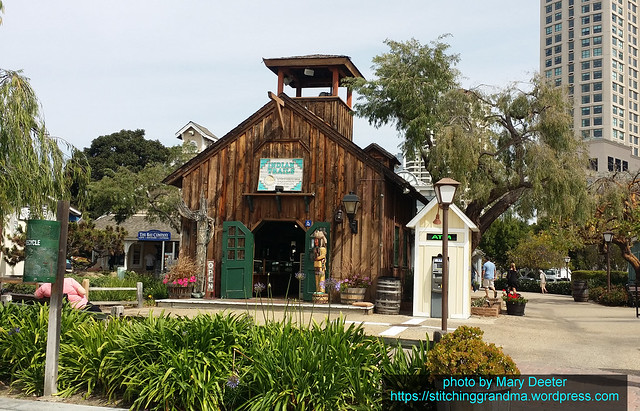 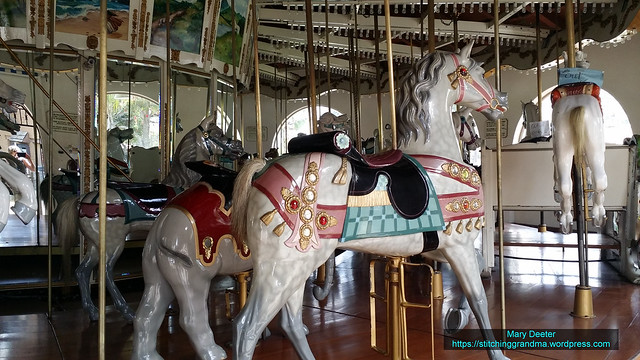 I loved the old carousel! 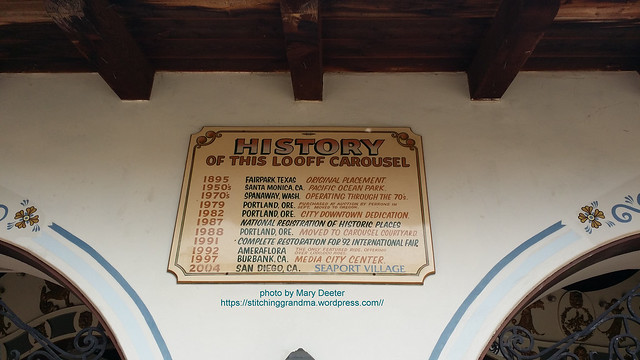 Too bad it was so early!  There wasn’t time to go back later for a ride. 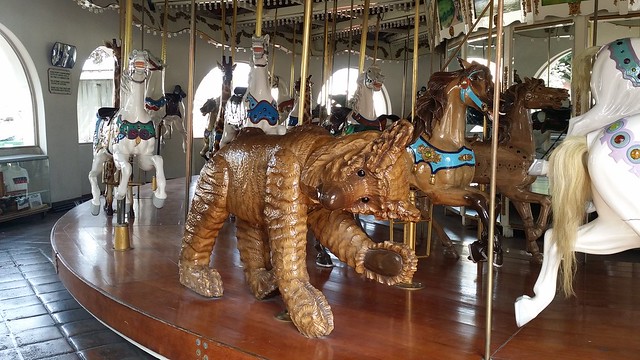 We eventually found our way over to the  San Diego Seal Tours kiosk, inquired about pricing and accessibility. 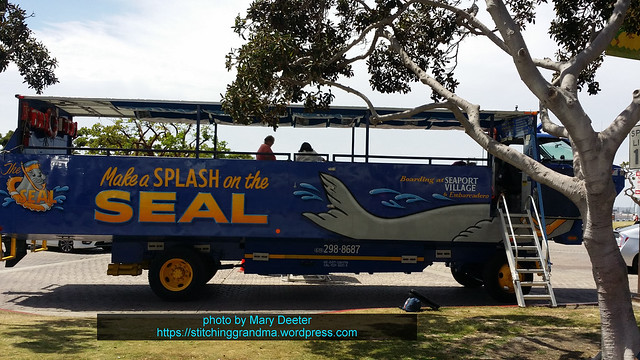 No way my sister was climbing those steep steps with her bad knees.  We didn’t book the excursion with the ship, because the steps were too steep.  I checked out the website and saw you could board in the Seaport Village using a handicap lift, suitable for non stair climbers and wheelchairs.  With that concern resolved, we booked ourselves on the next available SEAL.  What a great time!  This vehicle tours along N. Harbor Drive, and the Embarcadero, past the airport and eventually into the San Diego Bay.  Along N. Harbor Drive you could see all the wonderful walking areas, as well as the military installations that San Diego is known for.  The “splash” into the water was uneventful.  The views from the water were terrific and the tour was well narrated. Blankets were provided in case the wind was too much.  It was colder riding along on the road at 35 mph or higher than it was on our 5mph ride in the water.  The “water ride” was pretty noisy as you will note in this video. I was hoping to catch the sounds of the harbor seals “barking”, but the background noise over powered the sound of the seals on the video. 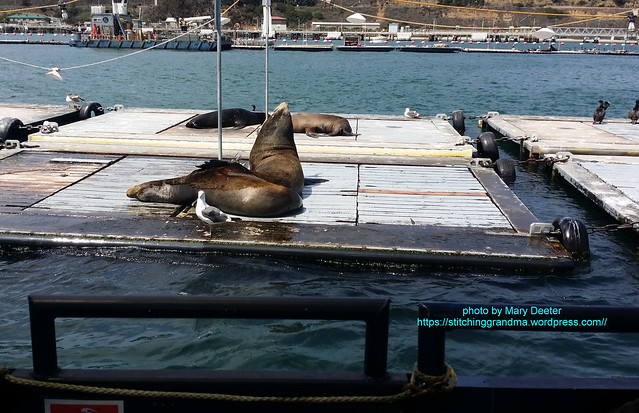 These platforms had “bait fish” underneath. I think the seals liked their resting spot!  Commercial & recreational fisherman stop at a booth on the platforms to purchase their bait in the bay, before leaving the harbor area to go deep sea fishing.

Of course, as our sail came to an end, all sailors get a silly hat to wear! 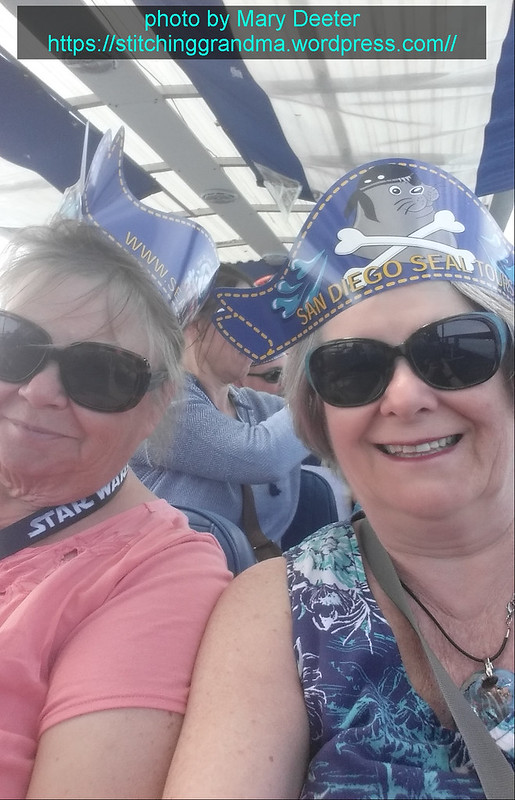 I was able to catch a quick photo of the launching ramp as we approached it to exit the water. 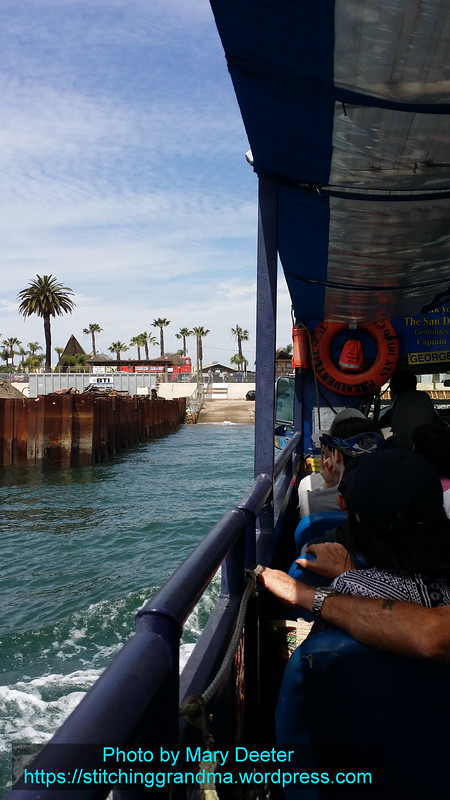 A short drive up the ramp and we were back onto N. Harbor Drive.  I enjoyed the sunshine, the blue skies and palm trees!  (At home it was dreary, damp and cold!!)

We finished our day with a little shopping, and a nice lunch with local beer at Buster’s Beach House.

Sail away from San Diego was wonderful to watch.  This really is a beautiful bay.  I haven’t been to San Diego since I was a child, and I enjoyed visiting. It looks like the kind of place you could go and spend a week.  Rent a bicycle or just walk along the Embarcadero.  The weather was perfect. 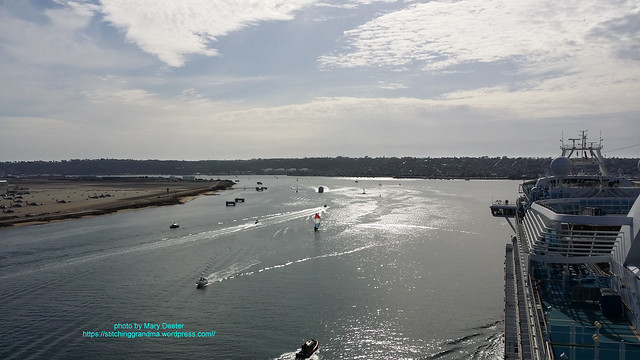 More pictures and posts on another day!