Not too long after I retired, I signed up for a series of “beginner quilt classes” at the local quilt shop.  We used two books by Pat Sloan, and made several patterns from “I Can’t Believe I’m Quilting” and the advanced book .  One project has been “fermenting” on my shelf. The pattern was called Get To The Point, and  I originally wrote about it in an early 2013 post- A Good Sewing Week.

A few weeks went by and it got mentioned – https://stitchinggrandma.wordpress.com/2013/02/03/on-point-with-borders-wip-still/  .

Later in 2013 I started to feel a little bugged by “unfinished class projects”  – https://stitchinggrandma.wordpress.com/2013/11/25/unfinished-projects-starting-to-bug-me/ .

Looking back at all those blog posts (do that later), I realized I had multiple projects going on, and a lot of indecision about how to proceed with many of these projects. I’ve learned a lot with those projects, and one thing I learned about me is l love to piece quilt tops, but get stuck with the borders and the “finishing”.

With this project, I decided to try my hand at “free motion quilting” not long after I put the top together and I hated the result, so the project got folded up and put on the shelf.  A few years later, it was one of my UFO challenge projects, and I took it off the shelf and worked at removing all of the free motion quilting. Oh, my seam ripper and I became very good friends.  Back on to the shelf it went to continue the fermentation process.

This past week, I went out to my sewing room thinking I would work on my Vintage Christmas blocks, but somehow, that project caught my eye and I pulled it off the shelf and unfolded it to have a look.  I’d done some basic “stitch in a ditch” after removing the free motion quilting (or maybe that was before the free motion, I don’t remember). Anyway, I decided I could tackle this top and clear it off the shelf for good. 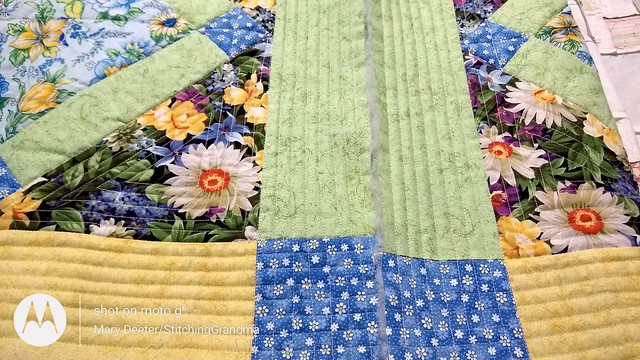 Because the quilt had been well anchored with the “stitch in the ditch”, I started with the borders. After the borders I moved into all the setting triangles, while thinking about how to quilt the sashing blocks. 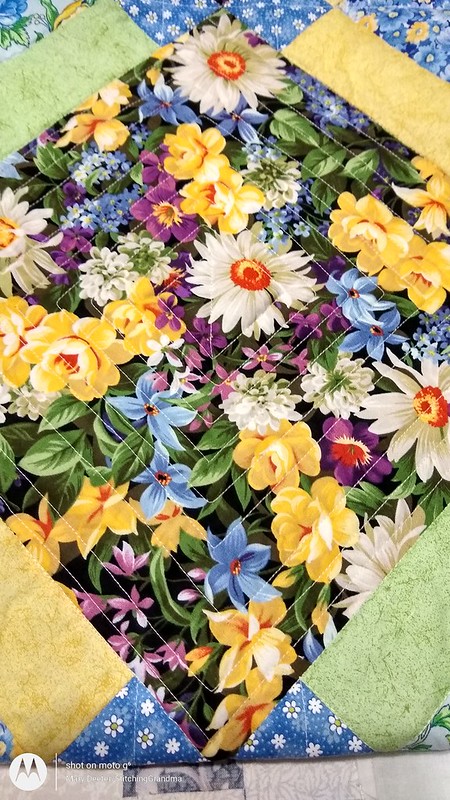 These big squares got a squared off spiral, starting on the outer edge of the block and working around to the middle.  The quilt had poly bat and I remember the disaster I had with “not enough quilting” on another project, so I went with a lot of stitching to really anchor this top.  (No I don’t use poly batting any longer, but I didn’t want to totally take this apart).

I spent a lot of hours at my machine this week, with the walking foot on, and did a lot of “straight line” quilting. I used at least 4 bobbins of Superior Bottom Line silver thread, as I worked my way across the quilt, down the borders and around and around the triangles points. I also used Silver (Masterpiece by Superior) on the top of the quilt.  I like the silver because it pretty much disappears into the quilt and you see the texture but not a lot of the stitching. 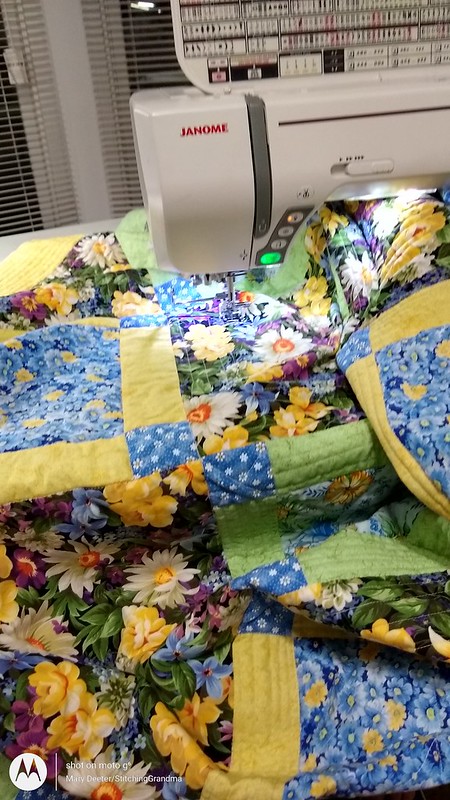 The back of the quilt really shows off the quilting. The original “stitch in the ditch” quilting was a different thread, so it tends to be more visible on the back, but I am ok with that. 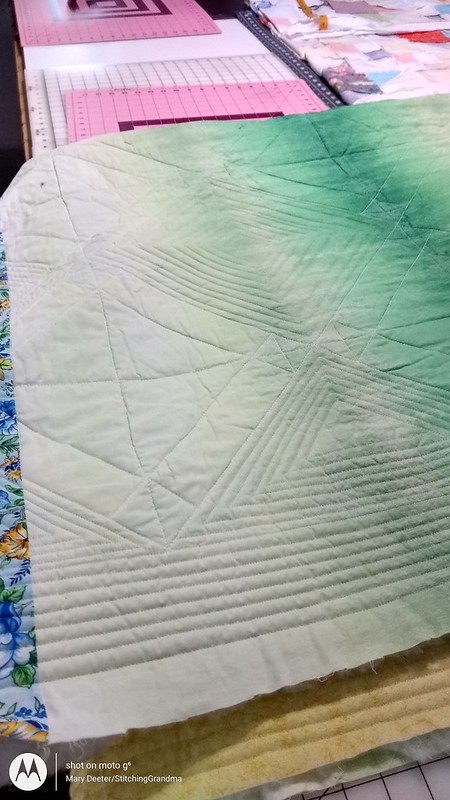 I finished the last block, trimmed the quilt and got the binding on yesterday, too. 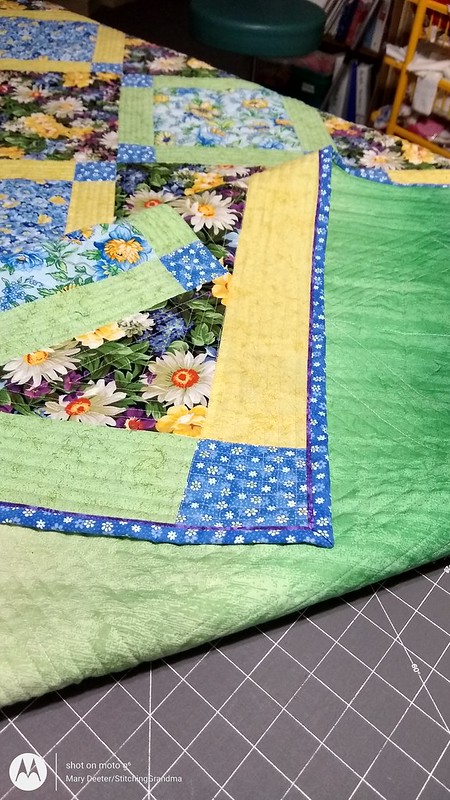 I am SO happy that I had tucked away fabric for binding inside the folded quilt to use for the binding.   I did my favorite “binding with a flange” also known as Susie’s Magic Binding.  (The purple for the flange came from a scrap leftover from the Senior Quilt 2020 backing). 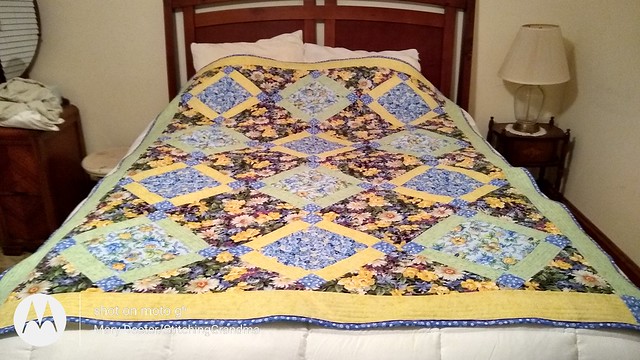 It finished at  57×74 (who knows why? Not me).  It is a great throw size for snuggling under in the recliner or on the back of the couch.  In this photo it is on top of the queen size bed in the guest room which currently has (gasp) a comforter on it, not a quilt. (It made a nice neutral backdrop.)  Before the evening was over last night, I ran it through the washer and dryer, and was able to sleep under it !  Ok, still needs a label, and I will try to do that today.

Oh, one more thing — I assembled the Scrap Dance TWIST and put on one narrow border.  It is now an official UFO/waiting on borders! The pattern is by Carole Carter on her blog From My Carolina Home 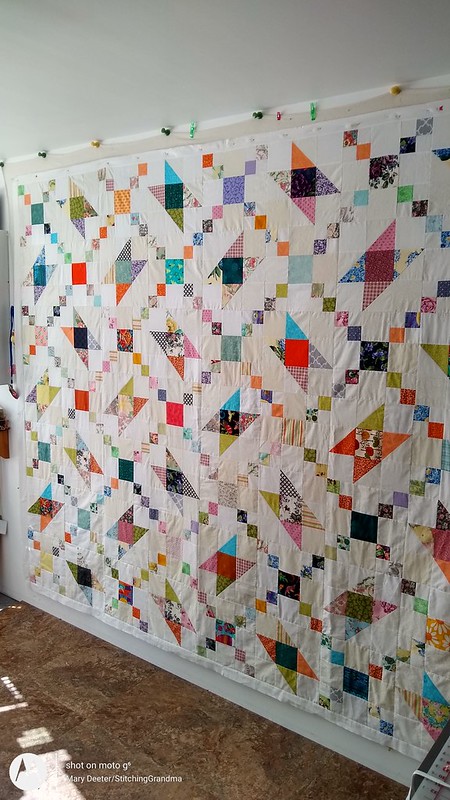 It is 86×98 and I plan to put a 6″ border of some kind all around, but it needs some thought (oh geez) and a good pressing! (Shooting for a generous king size of course).

If you are interested in the Scrap Dance Twist pattern, it is available on Carole’s blog for another week or so, before she takes it down and publishes it for sale. Honestly, if you like scrappy patterns, this is a great one to make.

Speaking of UFO’s….I took down off of hangers in my sewing room a bunch of them yesterday, to do a little show and tell during a zoom quilter chat.  There are a bunch, and when my friend asked how many I didn’t count the ones in bins.  Borders seem to stop me. I don’t know why, searching for the perfect fabric to set things off?  Realizing I have been making KING SIZED quilt tops (at least 5 or 6), and the idea of quilting them maybe is what stops me.  I ordered some grey wide backing in February, and have enough to finish at least 2 king sized. Perhaps my next UFO will be one of the oldest tops .  I’ll have to get back to you on that. Don’t hold your breath!

Disclaimer….if you go back to those old posts that I shared in the links at the top of this post, the CROSSROADS and the 9 patch CUPCAKES, Friendship Star table runner are really finished!  The Allietare is still “waiting on borders”, as are several other “Scrap Dance mystery quilts”.

What are you working on this week?