Just thought I would pop in and say hello!  Where DID July go?  I don’t know about you but 31 days buzzed by in record time!  We had the grandkids for a week over the 4th of July and enjoyed the holiday together! We got out “finally” to see fireworks at a local park and celebrate all together.  There was a lot of ooohing and aawing…and ice cream eating happening!

The youngest held on up to the grand finale!  So much fun~!!~

There was some porch sitting – but only on the cooler days! 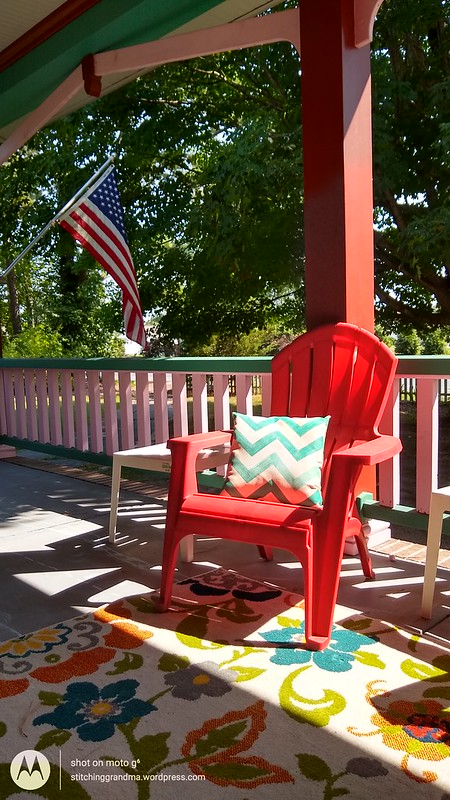 and pool time with all the grandkids and some quiet time too in the pool. 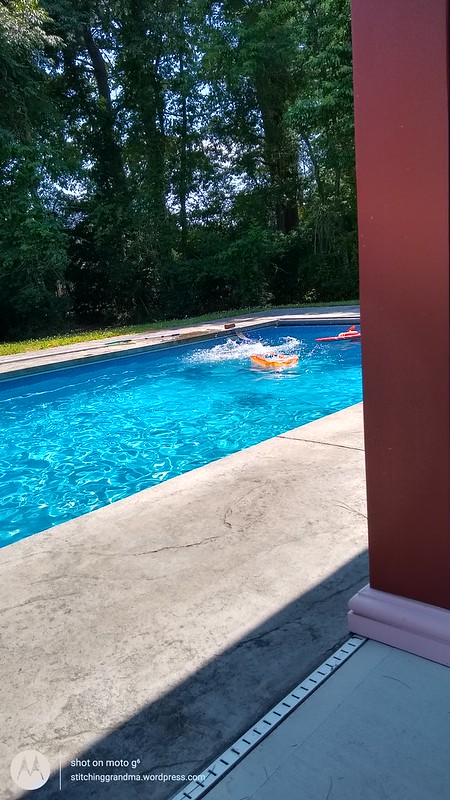 Hubby and I took a long weekend to go to the Chrysler Nationals in Carlisle PA where he won 2 prizes for his truck!  His “celebrity pick” was a great honor~!!! 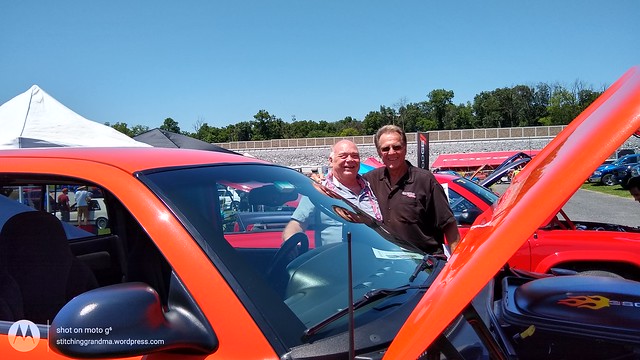 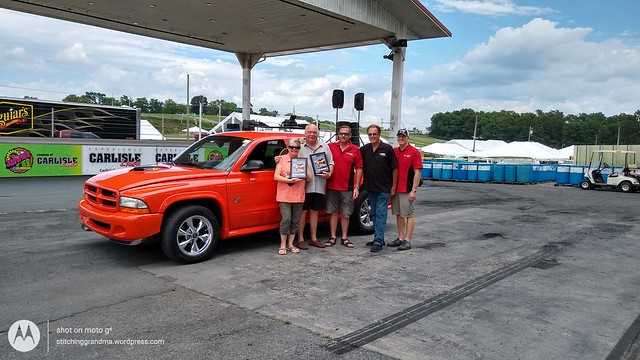 The first place for his category was nice, but that “celebrity pick” was icing on the cake!  Lots more photo’s of cool cars in my album here – Chrysler Nationals at Carlisle  .

We met a US Navy man at our lodging at Carlisle Barracks with a pretty nice car and had lots of conversation.  He headed back home to his duty station on the day after the show finished. His route took him right past our house. He and my hubby had exchanged contact information and when he texted my hubby that his car broke down; we realised he was just 10 minutes away.

Hubby had all the tools; and they spent a couple of hours chasing parts to do the repair.  We knew that if they couldn’t get it fixed, then we would put it on the car trailer and tow him home to Norfolk.

His beautiful Dodge Charger was something to see on the hoist in our garage! I have to report I was of no help other than feeding them both supper!

Oh; and for making sure they had plenty of approach shoring to back off the lift without dragging something on the ground.

7 hours later the repairs were done and he was on his way home to Virginia.

We have been out a couple of times to listen to music at the local state park and enjoy the company of our other grand daughter and her parents.

There have been a few bike rides, but less than usual due to the heat and humidity. 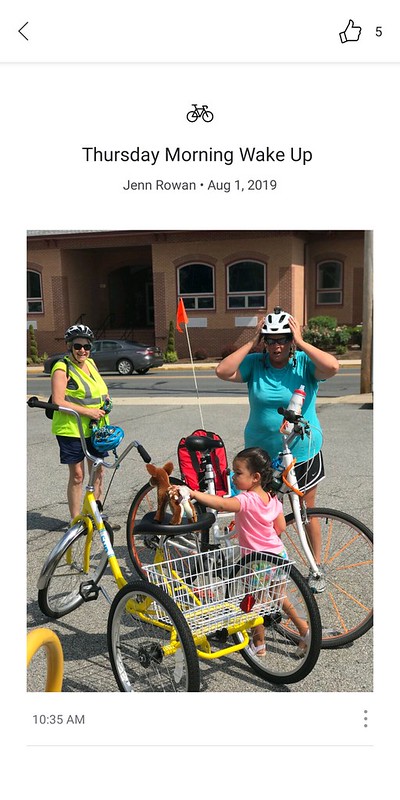 Two granddaughters spent a week with us, and we had lots of activity — Magic shows at the library with the granddaughters with a fellow that had some great entertainment.

A trip to the Delaware State Fair with 3 granddaughters & one daughter.  Yes, that is me at the “welcome” sign! 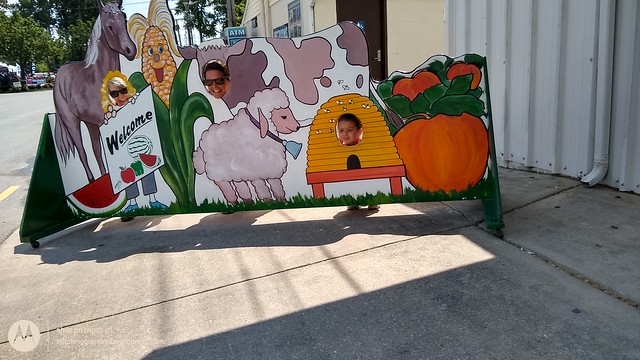 We enjoyed looking at the animals – 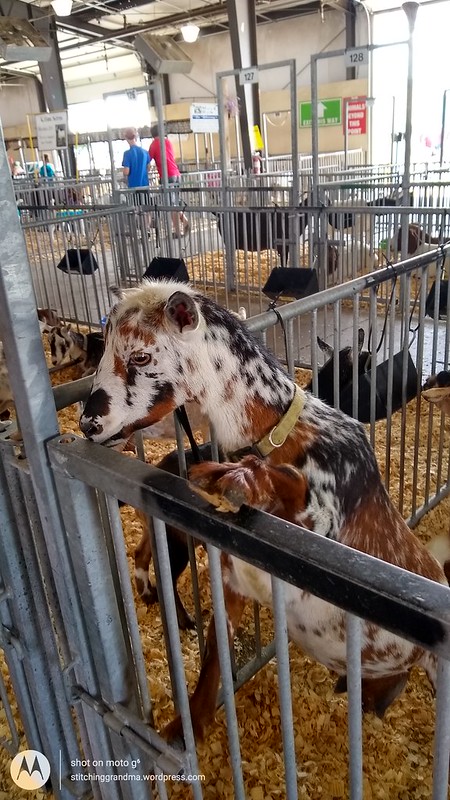 and interesting vehicles on display too. 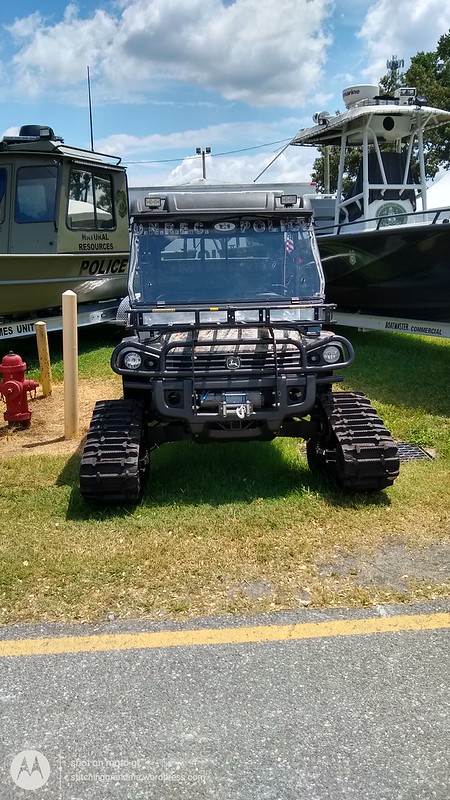 and to see the button crafts made by kids on display – 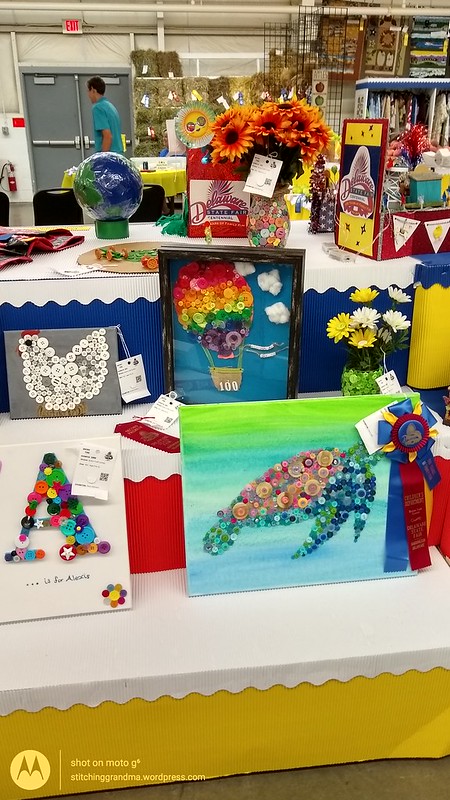 A favorite activity was the “touch a truck” where the kids could climb up and inside various vehicles; like tractors and ambulances and even a police vehicle! 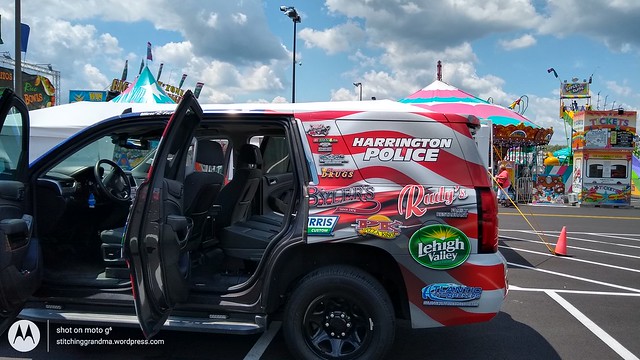 We did lots of walking and eating and walking and then there were the rides for the big girls!  They had “wrist bands” and could ride as long as they wanted!  Three hours later they were running on “low battery” and we went home!  Perfect timing to get home, cool off in the pool before dinner.

After the girls went home, Grandpa asked for help with some yard work.  UGH…..  He had me working hard one afternoon loading the trimming from things he cut into his garden trailer.  It was fine until I saw this snake skin in one of the limbs we were cutting.   EWWWW….. 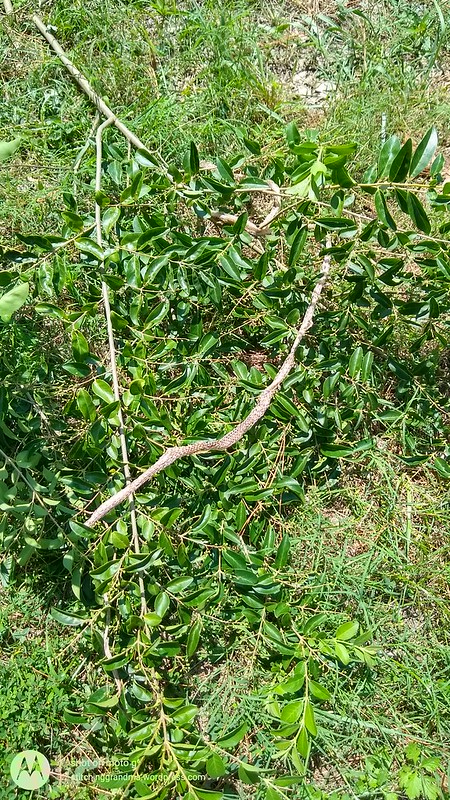 After the worst of the trimming was done I escaped to my sewing room for a few days.

It took me 2 quilt bees and a couple days at home to finally finish all the blocks and  assembly of the king size “Scrap Dance Minuet” . (Pattern by Carole – From My Carolina Home )   This was a mystery quilt we started in January or February; and the final instructions were given in mid June. 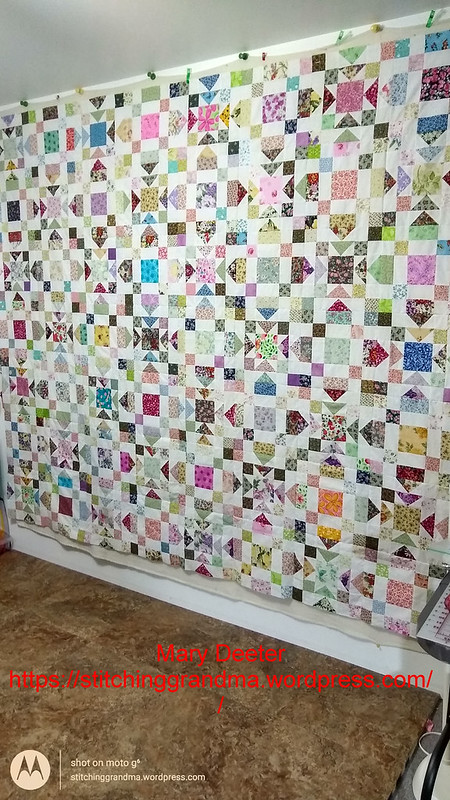 I’m going to let it hang on the wall for a while; and decide about borders and ironing and such.

I cleared some space and did a little repair work on this bike seat. It goes on the frame at the back of my daughter’s bike to haul the youngest granddaughter.  The stitching had come out on the seat belt guide on the right side. She had gotten a replacement from the manufacturer, but I decided to do the repair.  I actually had the seat so I could make a carry bag for the back of it. In the picture below you see the straps (orange) and elastic for the carry bag.  Once I got the carry bag made, I took the binding off the red nylon seat cover and tacked down the seat belt guides.  I put a little stiff pellon stabilizer under neath to give the stitches some durability. 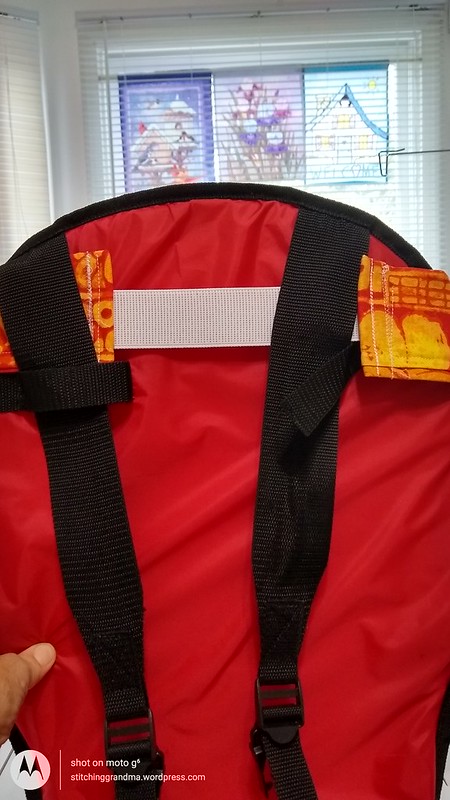 Not sure if you can see the guide hanging loose on the right side. That is due to the stitching on seat belt guide pulling loose. 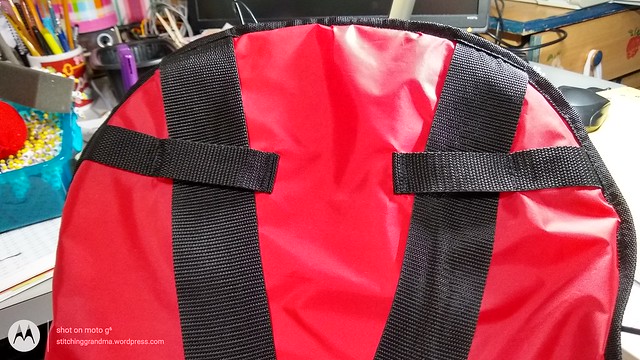 Both guides reinforced with stabilizer under neath the nylon seat cover.  Had to reassemble the interior of the seat and put the binding back on.  Stitching on the nylon is tricky as it wants to slip and slide and fray.  I did some “stay stitching” before I reassembled it.  It is definitely an improvement.

A promised project finally made!  My daughter I ride with asked if I could make a tote bag for the back of the baby seat.  It could not be “sewn” or clipped on the nylon; as it wasn’t strong enough to support the weight of the bag. I decided on adding a “band” like you see in the photo above that wraps around the inside of the seatback and goes “under” the shoulder straps. I was glad to have her “extra seat” here to help me think through the process.  I can’t wait to see this “on the bike”.  I may have to adjust the elastic band you see in the top picture.  This bag slips on the back of the bike seat with that band in the first photo. 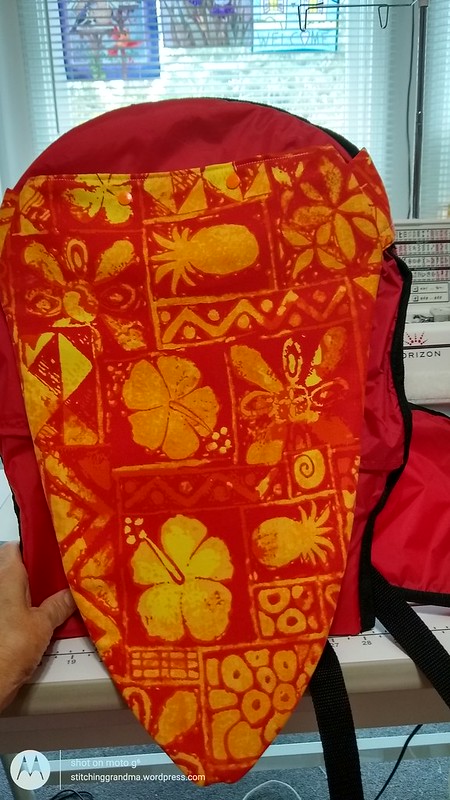 I added snaps at the top so she could close it and keep the “stuff” from bouncing out.  The odd shape is due to the place it goes on the back of the baby seat and in front of the fender.  I might have to shorten it and make it even with the bottom of the seat. 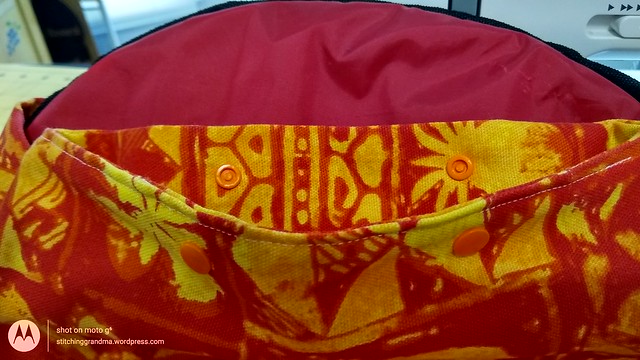 I made the bag out of  “outdoor fabric” leftover from a project I made a few years ago. It is fully lined with the same fabric and should do the job.

Another month gone by with 5 more placemats made by the lovely ladies at the assisted living. I think they have enjoyed making them.    The stack is growing.  I am off to sew with them later today.

Hoping the rest of the summer is as busy and fun!  Enjoy !