In my last post I mentioned I was would be working on my Autumn Jubilee 2016 placemats during my sewing time at the Material Girls Quilt Bee.  I am HAPPY to report that I have completed 4 placemats in this project.  But not, AT the bee.

Doesn’t seem like much of an accomplishment really, since I have been piddling with them since January or February.  Once a month this Material Girls Quilt Bee gathers, and we sew.  I decided to keep a ‘project in a box’ ready to grab and go.  Every month I would make 2 or 3 more leaves.  In August, I had enough leaves together for 4, and made some choices about the border fabrics when I came home, I got the borders on.  I wrote about it on this post –  Still play with Autumn Jubilee

Since our last gathering in August I just needed to assemble the backs and quilt. We didn’t sew in September, so the box has been languishing on the floor under my design wall.  And I had totally forgotten what was and wasn’t done!  (I really should read my own blog!)

As I went to “pack up my gear” for the bee, I had to look at what was in the box, where I was at on the project etc, since I hadn’t touched  it in 2 months.  So,  Tuesday (after I finished my Grandma’s kitchen blocks)  I got the box off the floor and took a hard look.  I re-discovered the backs were made and pinned to the front with so I didn’t have to even think about which back went with which top. (They are all unique).  I just needed to dig out the batting and QUILT.  I used batting pieces that were wide scraps, some of it pieced with that great Pellon tape.   I even managed to quilt one before I packed the car!  The remaining ones were all pined, and I left all four at home to finish “after” the bee.  (Disclaimer – one has been completely finished for MONTHS)

So, what did I work on during the bee?  I took my Autumn Jubilee box (now neatly sorted and organized) and made some more stems, and half square triangles, and built 2 more leaves.  I do have enough parts in that box for at least another 4 placemats.  (This should keep me going at the bees for another few months!)  I do like to have a project that doesn’t require great amounts of concentration while all the conversation is going on all around.  I’ve got all those parts, so why not!

When I got home, after the bee, I unpacked and decided I was going to finish the quilting on the remaining 2, and that went quickly.  I’m not sure you can see the quilting but I did a spiral from the center out over the leaves, then straight line walking foot in the borders.

I made the binding for all of them, and started putting it on.  Each placemat has different binding, to coordinate with one of the border fabrics.  I used my favorite method, Susie’s Magic Binding.

I ran into a snag.  I would get to the “corner” of my binding and my stitches were not “locking”.  I had a 1/2” or inch of space where the top thread and bobbin thread did not lock. I fussed, and fussed and fussed.  Thread changed, bobbin changed, needle changed, machine cleaned, bobbin race cleaned and still no stitches.  I must have tried 15 times and no luck. (Seam ripper engaged numerous times to take out the excess). I reverse sides, I changed tactics and started in the middle stitching to the corner etc. AGGRAVATED & getting cranky when things don’t go right!  (Does that happen to you??)   I knew it had to do with the thickness in the corner, but could not figure out a solution.  I gave up on Wednesday night and quit.

Chatting with my hubby on Thursday he suggested a different TYPE of needle.  I put in a heavy duty needle and sailed right through the corners!  (I love his fresh perspective and that he understands sewing!) This is what happens to me when you are TRYING so hard to finish something!  (FUN FACTOR GONE….you know!)

So, Thursday afternoon, I bound all of the placemats and declared DONE (for now).  We even used 2 of them at dinner last night!! 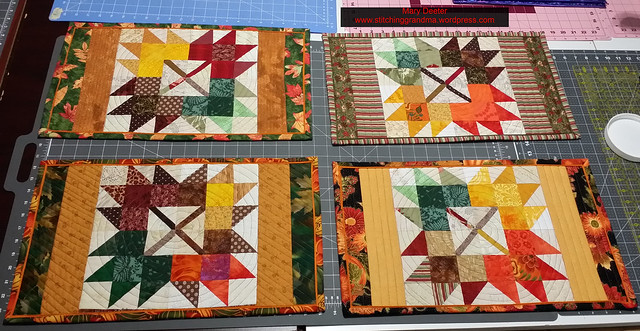 Each one has different borders and backing.  Here is a peak at the back side. 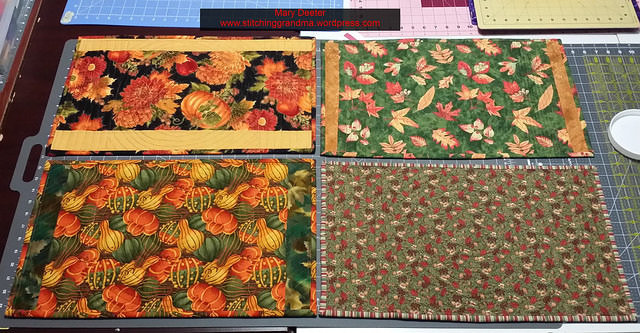 I love fall fabric, and my favorite is the top left, as it has a shimmering gold through out.  Note, all of these fabrics for the backs, and the leaves on the front, the borders etc were “scraps”.  Amazing amount of variety.  No “new” fabric was used in the creation of this very scrappy project, and no “new batting” was used either!

The original pattern was by Carole – From My Carolina Home on her blog in 2016.  I’m not sure if it is still available, but she has a new pattern out for Autumn Jubilee 2017, so go check her out – https://frommycarolinahome.wordpress.com/

Do you have any projects languishing?