I realized it has been TWO months since I wrote a blog post!  Time has certainly run away from me.  When I travel for any length of time, I always feel like I have so much to catch up on when I get home.  My trip to Alaska was fabulous.  In fact, it was so great, that another opportunity has arisen and I will be making a similar trip NEXT August.

My wonderful sister-in-law; Carolyn, known to many as the One Block Wonder Woman   suggested a QUILTING CRUISE !  She has suggested this before, but I always said no, because the cruise lines were not Princess Cruise Lines.  I’ve been busy building loyalty status on Princess, and was edging my way to the top level and didn’t want to miss out on those loyalty perks. Well, she picked up a flyer at a quilt show recently and low and behold, the quilting cruise will be on a Princess ship.  So; we are doing a 10 day trip out of San Francisco next August to Alaska and taking advantage of the 4 days at sea to learn and sew with like-minded people. This trip will include Sitka and Haines Alaska, which are new ports to me.  Of course, booking this trip and looking ahead at which class(es) to take etc has kept me busy. The big details are worked out; and in the coming months I need to figure out air & hotels; but for now, I am sliding the trip into the recesses of my mind and getting back to my current projects.

Would you believe I have a UFO finish?  It only took me 25 months…..Back in Sept of 2017 I took a class with Sandi Blackwell and used her method called Square-Agonals to make this – 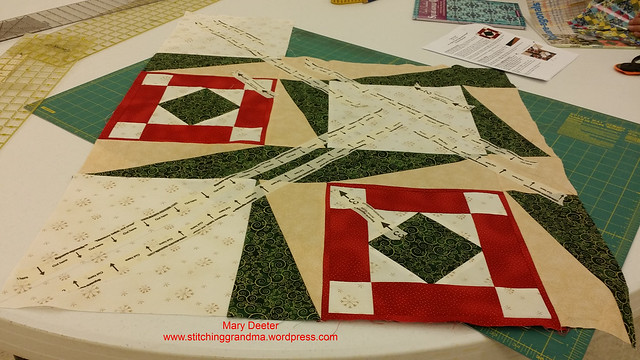 After some “slicing and dicing” of the block – 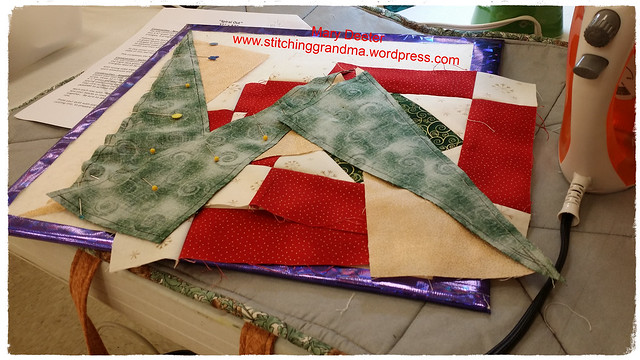 I reconstructed according to the SPIRAL OUT pattern, and ended up with this great project – 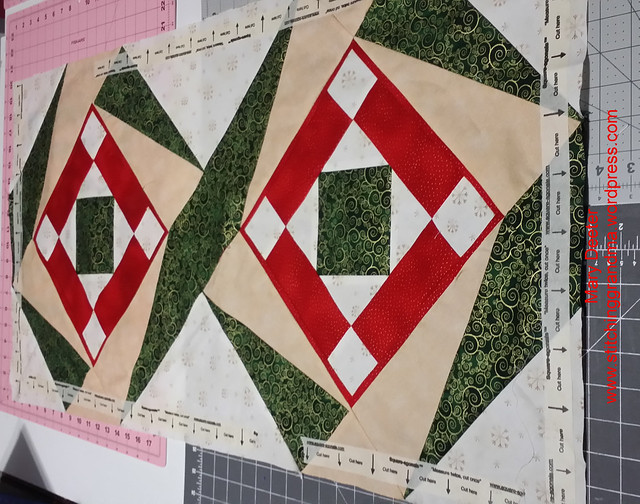 I brought it home from the class; did some quilting and then set it aside…..for 2 years.  Well, I had a 3 day Sit & Sew Camp at the end of October and got busy and finished up quilting.  I can’t believe I let it sit for 2 years when just the borders needed quilting.  I got the quilting done on the first day of sit & sew camp, and started making the binding. On day two, I finished making the binding and made a hanging sleeve too. 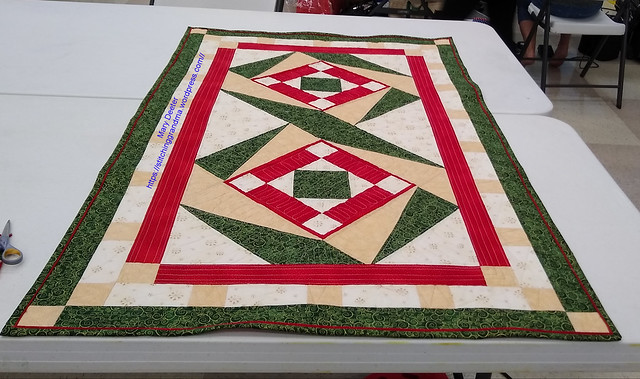 Of course, I used my favorite binding method “Susie’s Magic Binding”.  (If you follow me on a regular basis, you KNOW that this is the only way I do binding anymore. All by machine!!  LINK to the method at the bottom of this post.)

Binding went on and the project was completed….sorta….It still needed a label.  More about the label in my next blog post! (SOON….really……)

Before I show you the back…I have to confess I was lazy when I quilted this back in 2017.  I used my Janome 8900 and let the machine do a locking stitch instead of being good and pulling my bobbin thread to the top.  While it looks ‘ok’ on the front, the back looks like a lot of “thread throw-up”.  You know, chunks where the top thread and the bottom thread get all yucky.  Since this photo I have used my micro tweezers and gotten a lot of it cleaned up, but it is NOT show worthy, and certainly not “judge” worthy.  Lesson to myself.

The other lesson is about “details”.  When I pulled this out to “finish” I could not remember what thread I had used to do the quilting. WHY didn’t I just pin a note to it..??????  Hindsight being 20-20, I won’t do that again.  When I did the quilting on the last two borders (the cream and gold border and the green), I ended up using a different thread.  I see it; but maybe others won’t.  The original thread was a silver variegated Superior Fantastico thread.  The thread for the last two borders was silver Bottom Line thread from Superior. It is slightly different, since the Fantastico is 50 weight and the darker silver runs through it.  The Bottom line is much finer at 60 weight and all but disappears.  (Wish I had used it on the entire project in hindsight).

So; here is the back…..and on the outer borders you can see how the thread is almost invisible.  And yes, I pulled my bobbin thread to the top and tied off…so it is a little cleaner all around the borders. 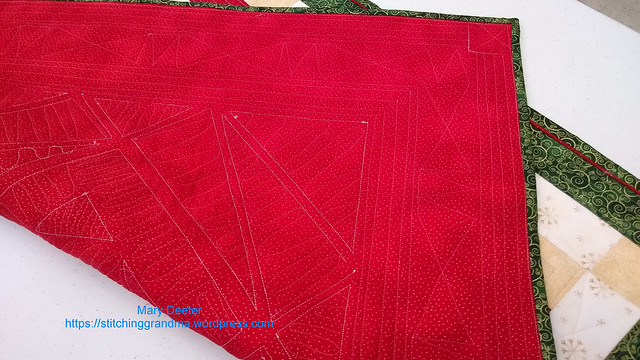 So, here we are, nearly the middle of November and in two months I have one project finished…..at least to talk about.  I have a Christmas project underway that I can’t share until Dec 26th.  I will “write” and “photograph” along the way, and just save that post to publish after the item is gifted.

I’ve had lots of other activities going on, and will save them for future posts!  I won’t wait quite so long for the next blog!

Go hug a Veteran and thank them for their service!

10 thoughts on “When Time Runs Away”