I’ve had a fairly busy week.  Mid-week I was going to post something and then FLICKR had an outage while they did a platform migration; so I had to patiently wait…..in order to share my photos on the blog post. The downtime was much longer than I anticipated!

Wrapping up the never ending placemat project  — The final batch of batik placemats has binding on them!  Happy to get them finished!  Now; what to do with them????  (Started these last summer, and they turned out to be a fun project for free motion quilting practice) Time to put the basket of batik strips away for a while. Total made – 18. 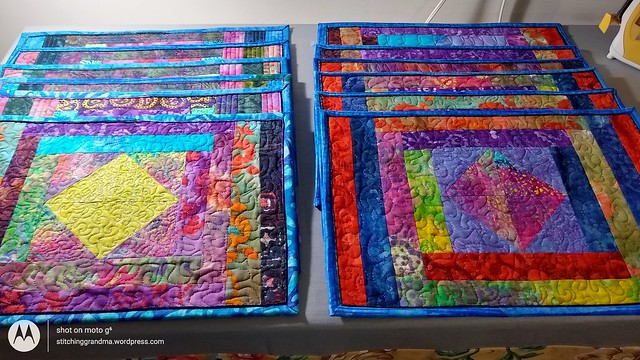 I attended a “sit & sew” on Thursday and Friday and got something “finished” during that dedicated sewing time.  Funny thing is; I honestly didn’t know what I was going to work on until it came time to load the car on Thursday morning to leave. I walked into my sewing room; saw my 2 unfinished Cardinal blocks on the design wall and made a fast decision.  Another started these LAST year….had 1 completed and 2 unfinished.

My 3rd bird is not finished; but I have big plans for it on Tuesday at my Queen Bees gathering! 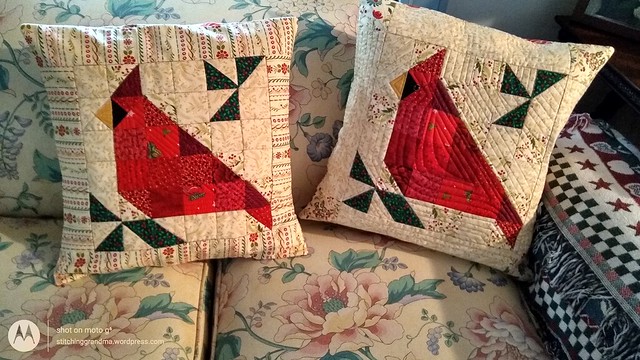 The bird on the right is “last year’s” model.  The one on the left is the one I finished on Thursday.

When I was leaving to go to the sit & sew, I forgot to grab the finished one to bring as a “reminder” of how I did the quilting etc. I also failed to bring all the thread colors I might need.  I was “saved by my friend Cheryl” who had an array of choices and shared!

Bird # 3 will fly into the blog after Queen Bees!  The quilting is about half complete and then I need to put it together into an envelope style pillow. These take about an 18″ pillow form with the borders I added.    The pattern I used came from Mom and Pop Quilt Shop

I am headed over to the assisted living facility where my friend June lives this morning. This will be my 3rd trip in a week. She has been inspired to begin sewing again; and I have been “on call” for sewing assistance.

Hubby did some “tension” adjustments and general maintenance to one of her machines this week, repairing some broken latches on the bobbin access door and getting it “sewing right”. He inserted a nice LED bayonet style bulb that I had ordered, and it “lights up” the sewing area so much better than the old bulb. (Another back story….June’s machine was having serious tension trouble and I spent 3 hours trying to get things right last Saturday. Her hubby tried too; and in the processes the light bulb went out and removing it was a mess!  Those old bulbs rust in their housings and break between the brass and the bulb when you try to remove them. So; ordering new LED bulbs from E-bay was an absolute necessity. I got great price and service and from http://singer-featherweights-revived.com/index.html.  The store name on EBAY is “old times sew in stuff”.  The machine is not a featherweight but takes the same size bayonet  bulb. ) Thank goodness she had a 2nd machine to sew on, so I could bring the other one home to get fixed.

Anyway; June is making some gifts for her daughter in law and is on “deadline” for an anniversary mid June, and so I am providing “tech/sewing” support.   😉  She is finally feeling well enough to WANT to sew; and that is good news and makes me want to help her get going. She saw a pattern in a magazine for a sunflower mug rug 2 months ago. After she first showed it to me,  I assembled a container of her fabrics from my sewing room.

Well, like sewers and quilters everywhere, she has “grown the project” into something more and now she is making 4 placemats!  (Sound familiar??) I am taking “more” background fabric and batting today so she has enough!  (Originally I took her enough supplies for the “one” mug rug). 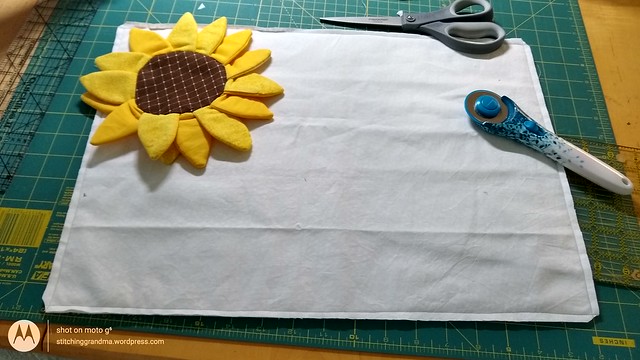 When I left her on Tuesday, this is how far we had gotten. One placemat ready to turn, and one sunflower ready to stitch down. Since then; she decided that the sunflower needs to be “removable” ; so I picked up some “sew on velcro” and will add it to the placemat and the flower. Will certainly make it “easier to wash”. And like anyone who has sewn, she has “re-invented the sunflower” as she progressed. Needless to say; it is FUN watching her making sewing and design decisions again!  She has been “out of the game” for nearly 2 years and I am ready and willing to get her busy again.  She needs a lot more help these days; but who doesn’t at their mid 80’s?  I just love that she is inspired again!

Last weekend, after I spent time with June, I convinced the hubby to take a bike ride. We have such beautiful state parks; and there is one nearby with great tree covered trails and bridges where you can stop and enjoy the water view too. 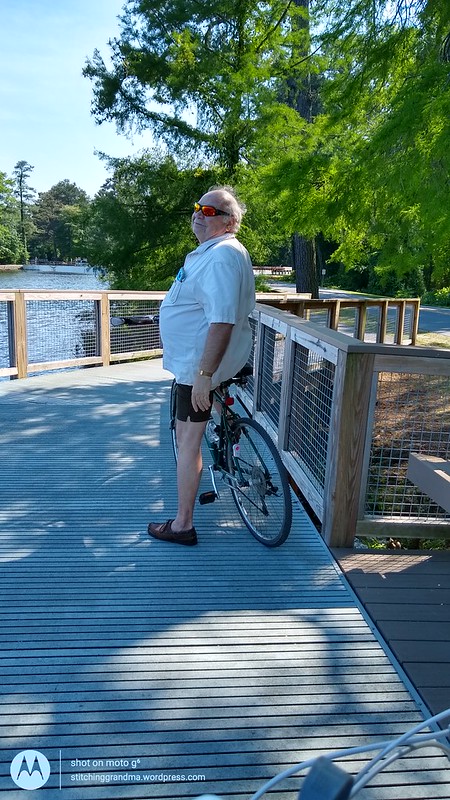 I might have not told him “exactly” how far it was to make the whole loop! 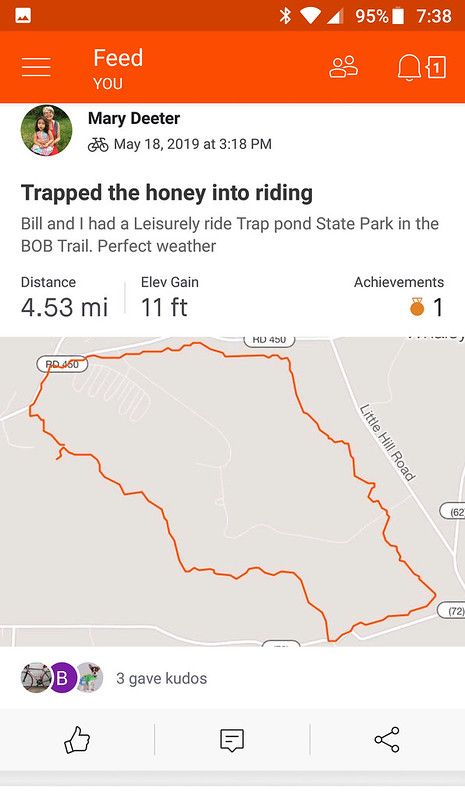 I did treat him to a nice dinner later, at the beach! 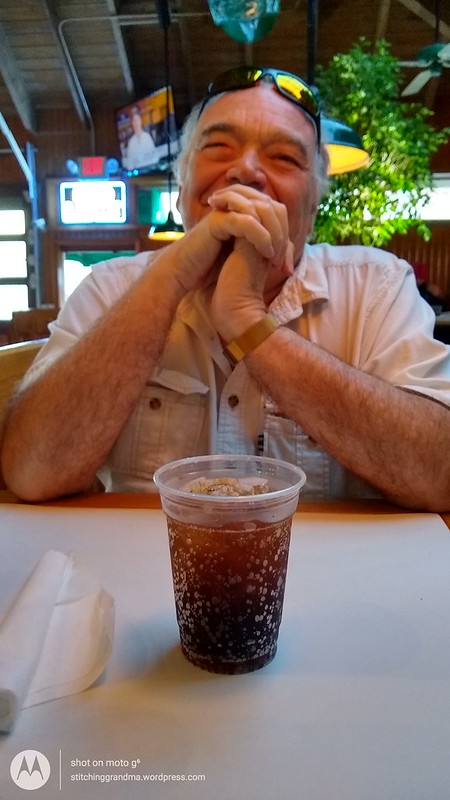 It was nice to get to the beach “one last time” before the start of the summer season. Memorial Day is the official start and the roads and beaches will be jammed.  We enjoyed a quiet evening before the crowds take over. 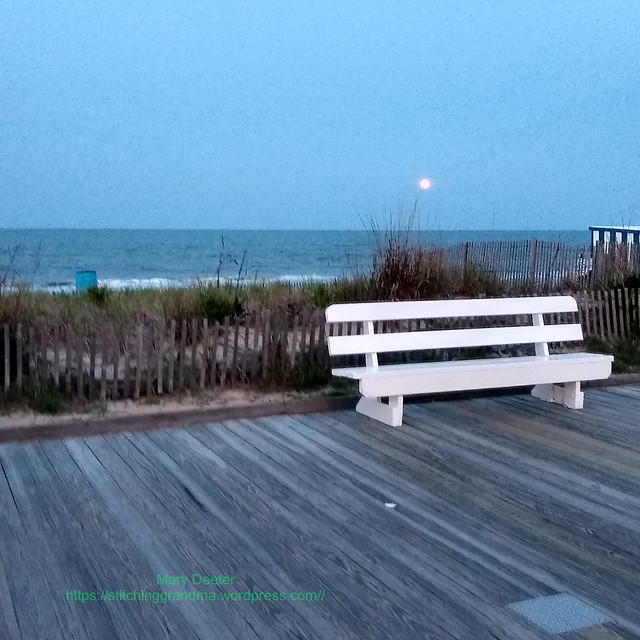 We buzzed the neighborhood across the road once during the week together on our bikes,  so he could make more bike adjustments.  (And to help work off the tacos….wasn’t enough exercise….) 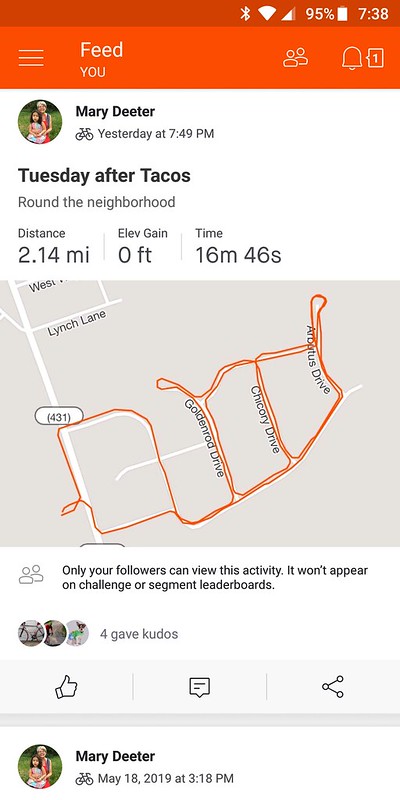 On  Wednesday night I rode with the #LIFECYCLE Community Bike Ride. 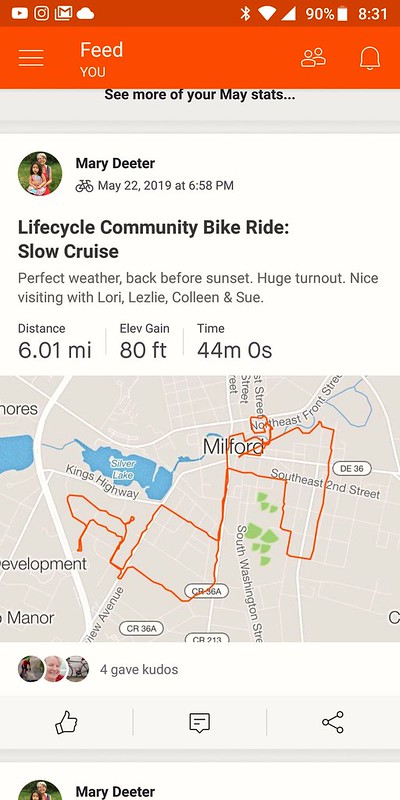 This month, in spite of that “road rash back on May 7th”; I have gotten 42 miles in.

Last night there was a “glow ride” in Milford. This was sponsored by #LIFECYCLE .

What is a glow ride?  Check out the story about the glow ride from the local news  and see what the “glow” is all about !!!) – https://youtu.be/PjzY_6Ya-uw

I did one glow ride last year, but I didn’t want to fight the holiday weekend beach traffic to get home afterwards.  Instead, we made a short trip to pick up some new “glow lights” for my bike and hubby installed them after dinner. They look so cool! And I am ready for the next Wednesday evening ride! 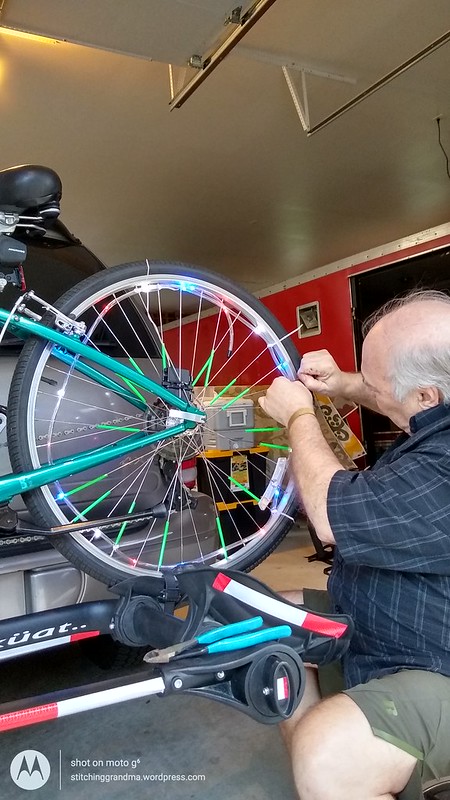 The “still” photo below gives you a general idea – 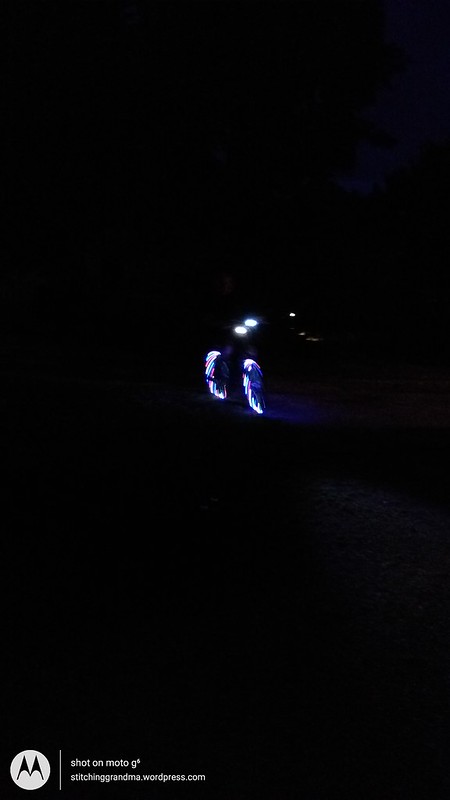 It is hard to explain how cool they look, so I have linked a video I filmed in our driveway – Wheel lights in motion

I think when I suggested these lights he thought I was nuts; but after he took a spin around the driveway; he saw how much FUN it was.  Next week is a rather long ride and I now need to work on getting the “right” combination of headlights on the bike!  More about that later.

Go out and have some fun!

After dinner update — Look what we accomplished today – I think they look pretty darn good! 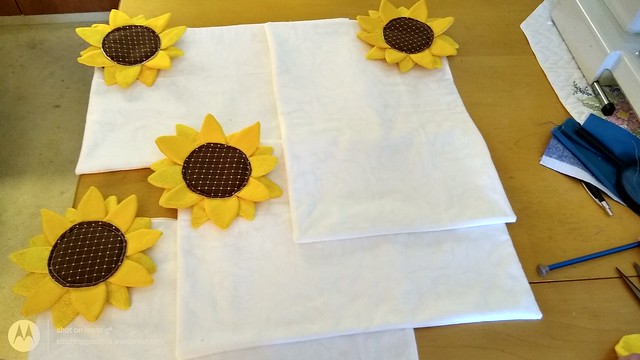 10 thoughts on “A week of finishes and fun”