BUSY WEEK !!  Monday was Ocean Waves Quilt Guild meeting, so that meant an afternoon of loading containers in the SUV, and a 7 am departure to unload and set up for sales before the meeting began, then pack up, store some boxes and bring the empty containers home.  (We sold 85% of the fabric we took to the meeting!)  I am grateful to be able to store at the church where we meet, and only have to bring home empty containers and new donations.

As the week has unfolded, we have had rain coming down in bucket loads. We got most of our unloading and reloading done between rain showers. Our area on the mid-Atlantic coast has been beaten with a Nor’easter storm.  Amazing amounts of rain in some areas, with flash floods.  Fortunately, I am not on a waterway, or a known flood zone.  I have a friend whose parked car flooded in a shopping center lot, where she had parked to carpool for the day.  While that particular storm raged for a short time, I was miles away stitching at Embroidery Club. A couple of the husbands called their wives at the club to report on the rains. Yet where we were, 30 miles away, the skies were just grey and gloomy.  Early in the week the discussion about Hurricane Florence in the news made us wonder if it was going to come this far North.  This morning, the maps look like North Carolina is going to take the worst of the weather.  We will be lucky in that case. We are already so saturated after nearly 2 weeks of rain!  I can not imagine having to pick and choose what to pack up and take with me in the event of evacuation. We are fortunate!

On Tuesday afternoon, while the rain came down, we were busy stitching.  I took 2 projects with me to work on at the Embroidery Club.  I purchased a design from Embroidery Library and one from Oh My Crafty Supplies.  I stitched both designs out on cream colored craft felt. 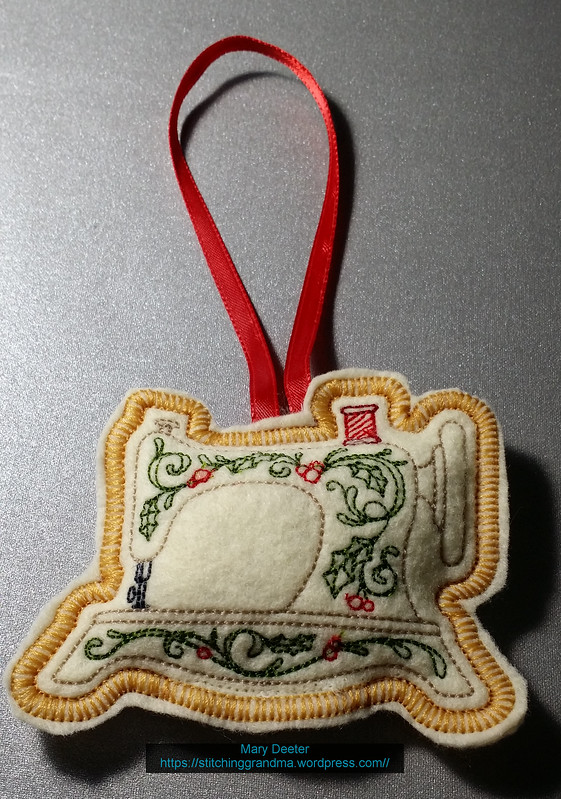 Embroidery Library calls this design a “stuffie”, done “in the hoop”.  I chose to use my applique scissors and cut out after the stitch-out.  I will try again cutting the shape first, using the dieline template and see which look I like better.  It was suggested to me not to use a Water Soluble Topper (WSS) on top of the felt, as it would be too hard to remove, pull stitches or cause problem with the felt.  I used a tweezers to remove most of it, and lightly misted the remaining, blotting with a paper towel.  I had to use tweezers to stuff the filling in.  The stitch out left an opening on the bottom for filling and I used my regular sewing machine and matching thread to stitch it closed .

The key fob below is the perfect thing to hold onto my flash drive full of embroidery designs! 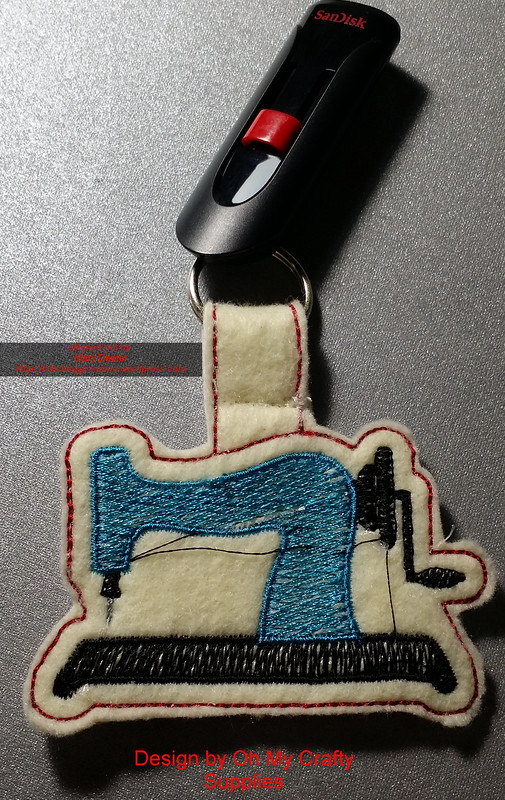 ITH Sewing Machine Key Fob Embroidery Design by Oh My Crafty Supplies Sketch design 2.9″ x 3.8″
This stitchout did not give you “placement lines” or “dielines” for placements, so I ran the first color “twice”.  First run to create a dieline on my stabilizer, then the second run tacked down the felt with those read stitches on the stabilizer. Right before the final outline stitch, I placed a piece of felt on the back of the hoop so I could have a nice finished backing.  Rather than use a snap, I used my sewing machine to close the loop around the keyring.  Thoughts –  I felt the “fill” on the 2nd one (blue machine) was too thin.  I should have gone back in and run the fill a 2nd time.  I posted this picture on the Facebook group for Oh My Crafty Supplies and someone said the “SKETCH” design was why the stitching was so light.  Hindsight!  I am going to try this stitchout on a different fabric and see if I like it better.  I haven’t removed the WSS on this one yet, so you still see “shiny bits”.  This one I also “trimmed” after the stitchout.  It is small, only 4628 stitches, so I think I will try again.  LEARNING CURVE….

I’ve been working on my batik placemats.  There are 18 of them and more in the works!  I took about 6 and used a different backing fabric.  I decided to not do free motion quilting on this group, instead, switched out to my walking foot.  I have 4 done and 2 to go.  I do a much better job with the walking foot I think! 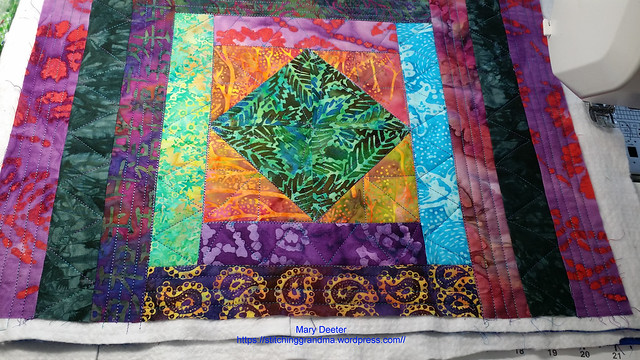 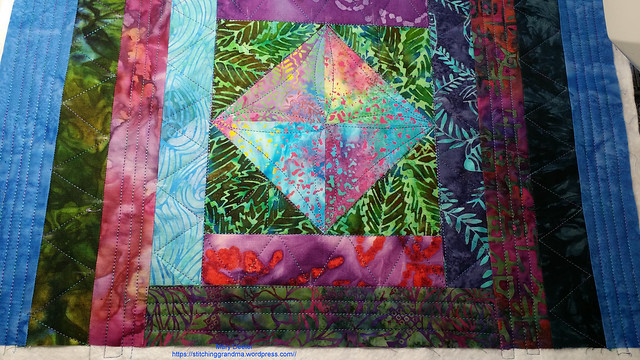 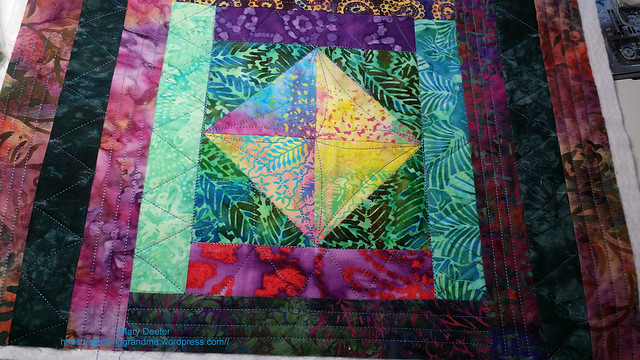 here is a peak at the back! 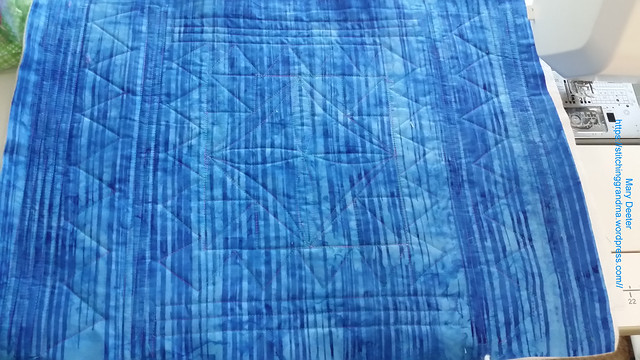 I love the way this worked out.  I did measure out those triangles and mark the front with a chalk where the points of the triangles were to land.  I decided to do all the ones with this backing in the same manner, so they look like a set!  (I like them better than the ones I did the free motion quilting on…..)  Somebody (more than 1) will get placemats for Christmas, I just have know idea who that will be quite yet!  We use placemats everyday, throw them in the washer etc, but there are too many here to keep.  I just love making them.

It’s a busy week with meetings, and I am off to the 3rd one of the week in a few minutes. Hoping for time to have a little fun later today!  Stay safe, stay dry!