Yesterday I showed you a peak of my Christmas Cardinal Block I was working on.  It was such a cheery block to work with, I just could not “stop” and wait until the Queen Bees gathering on Tuesday.  My husband is still laughing because I was “working ahead” of the bee project!

Cardinals are said to mate for life, and I don’t want an odd number! I finished up the first block and cut enough fabric to make at least 2 or 3 more.  Those pieces will hold until Tuesday for our bee gathering.

The block was  designed for a Christmas 2017 quilt.  All the specifics are on the link above. Laura-Lynn of Mom & Pop Quilt Shop even wrote a nice comment on yesterday’s blog post and included a you-tube video link   She does videos all the time and has a 48 minute video talking about the construction of the block. Laura-Lynn’s videos make me feel like I am sitting in her sewing room with her, as she chats and laughs while she sews!

Anyway, I thought I would share a little bit more about my first cardinal block.  I decided the block would be incorporated into a pillow.  I sized everything for an 18″ pillow, and used the “envelope style” for ease of stuffing and unstuffing of the pillow form or one of my every day pillows. 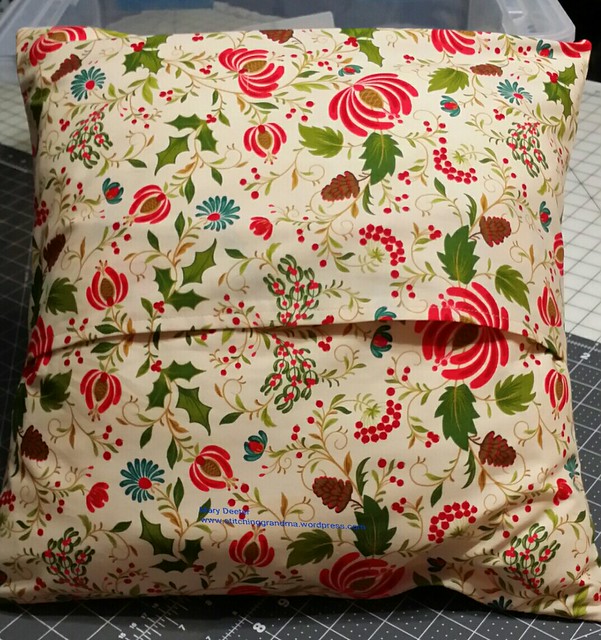 Since it will be a Christmas decoration, I want the ability to pack it away flat after the holiday.  I will probably slip my existing sofa pillows into the cushion cover.

The block finished at 12″ and I added a borders before quilting.  I really wanted the bird to “pop”, so after I cut my muslin and cotton batting I slipped 2 more layers of wool batting under the area of the bird.  Once I did some outline quilting of the bird, I folded back the square and trimmed along the edges.  Then I smoothed out the square and did my quilting around the bird.  Once that was all done, I changed to a variegated red  Superior thread and did some quilting on the bird body.  For the beak I switched thread  again, and used some of my embroidery machine thread in gold and black.  Last but not least was  how to make the eye of the cardinal.  I don’t do hand embroidery, so  I dumped out the button box and dug for “just the right” button.  (Note….I am making more pillows, so I held out a “bunch” of those “just the right buttons”.  No, they won’t be the same.  Each will be unique!)   I looked online at a lot of photos of Cardinals to decide just where to place the eye, and to get a look at the way their feathers lay before I quilted!  Those photos led me to pick a button with gold around the edge. 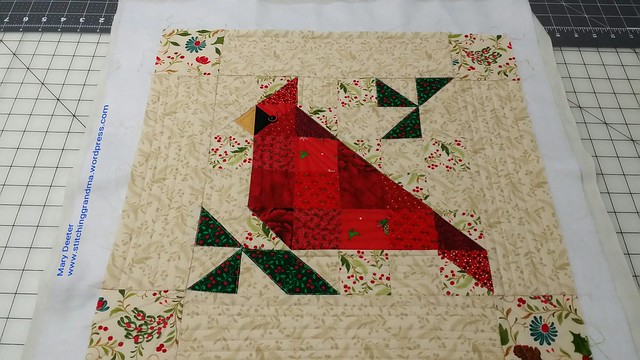 Once the quilting was finished,  and the button sewn on for the eye, I trimmed off the excess batting and muslin.  (Note, I used the muslin so the inside of the pillow would be smooth)

Here is a close-up of the bird – You can see how I quilted his body.  The addition of the extra 2 layers of batting give the cardinal a plump look. 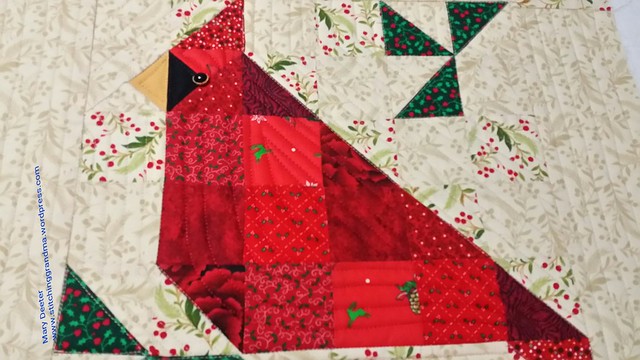 The pillow form was inserted and I think I got the look I was after. 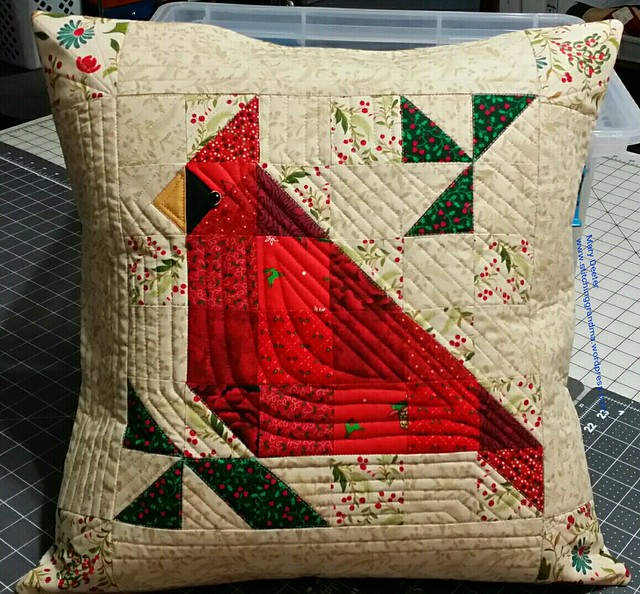 I now have a pair of 18″ Christmas pillows from this line of Moda Christmas TOLE fabric.  I bought several yards of the coordinating fabric a few years ago to make 6 Star Christmas pillow slip covers for my daughter.  You might remember I had trouble with one pillow and the markings from a pencil, and had to “remake” her 6th pillow.  So, I ended up with 1 star pillow.   I can STILL see those faint lines from the silver quilt marking pencil, but from a galloping horse it blurs into the background.  The following Christmas I made her a table runner with the same star pattern.  (I linked to it yesterday).   Because I still have several yards left, I chose this fabric for the project.  The body of the cardinal is from red scraps of varying origins and vintages. The selvage was on the red holly leave and was from 1992! While looking at the Moda Tole fabric,  I looked at the sale ticket from the original Moda fabric purchase – 2016. 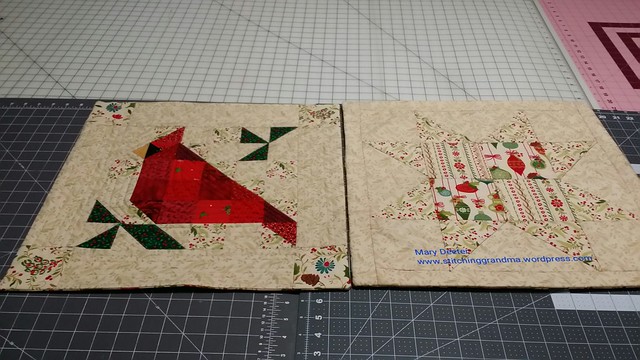 In one of the comments yesterday, Quilting Nurse asked if it was a hard pattern to make.  I must say I found it fun and easy!  I mentioned to her a couple of things.  I think the cutting instructions I had could be improved.  The pattern had us cut squares at 2 7/8 for the half square triangles (HST), and 3 1/4″ for the beak quarter square triangles (QST).  I don’t know about you but I like even 1/2 ” increments.    My suggestion is to cut for your favorite method of making a 2.5″ HST.  Some people like to make the 8 at a time method.  I like to cut my HST base pieces at 3″ and construct, and trim to 2.5″ with the June Tailor Perfect Half Square/Quarter Square Triangle ruler.  Others might be using Bonnie Hunter’s methods with strips and the easy angle or Deb Tucker’s method.  Which every way you do it, cut so you have a 2.5″ HST when it is done.   All the squares in the basic block are 2.5″ before being sewn into rows!  Bottom line, I would rather trim than come up short of HST & QST.   So, before you start cutting, decide your “best method” and adjust accordingly.

I will be taking my first bird for show and tell, and doing some more construction during the Queen Bee’s gathering on Tuesday.    If you make one of these Cardinal blocks, tell me what you will do with it.  Wall hanging, table runner, quilt???   Share your photo’s.  Have fun stitching!