At our house, summer is always full of projects that will never end.

Several years ago I spent the entire summer (it seemed) rebuilding a picket fence, sanding and staining fence pickets.  Thinking back it was BEFORE I retired, so that was more than 6 summers ago.

Then there was/IS the porch swing that I sanded and repainted, the summer the garage was finished. (Again, before I retired). 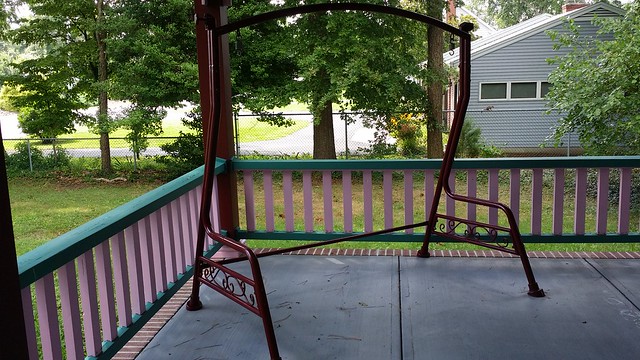 All of it, except the swing part.  I got distracted and the swing stands in the garage waiting.  Maybe next week!  If it ever quits raining! Oh, and those porch rails and pickets that I sanded and restained while the porch was being renovated…the top rails need some work again.  Seems as though it is always something that is less fun than sewing!

The garden…well…it is overgrown with weeds and it is simply to darn hot and humid to get out in it to weed.

The ONE nice day we had last weekend was consumed by a yard work task.  Hubby decided he wanted to tackle some of the overgrown stuff that had been neglected for 2 years.

SO, I left my sewing room, donned my gloves and pitched in.

Honestly, I would like to strangle the person who planted this crap decades ago.  On our property, we have wisteria, privet, trumpet vine, honeysuckle and bamboo. One would be problem enough, but all of these run and have to be constantly taken down, cut out, trimmed back or they overtake the property.  We have finally gotten the worst of the bamboo that ran along the property line under control when the neighbor started to work on “his side”.  There are the odd bits out front but they are not anything like they used to be and an afternoon of cutting eliminates them.

Out back, well that is another story. Behind our garage we have a big open gravel area that we had cleared when the garage was built. Then we have woods. About an acre and 1/2 of woods behind the garages. The bamboo has overtaken part of the woods to the point I don’t think we can do anything about it.   We could cut everyday for the next month and not make a dent in it.

Hubby had a nice bed of daylilies between the lawn and the back driveway that he enjoyed tending.  Then, it too filled with bamboo, (while I was sewing one day I think) and he was overwhelmed. We really know it got out of hand during the 3 years where his back just would not allow him to do much more than mow the lawn, and I was sewing!

So, this past Sunday afternoon, with my gloves on, he and I tackled that 4×15 foot bed cutting bamboo.  We spent 4 hours!  He was able to hold back the top of the stocks with the rake, while I worked with the big clippers cutting it off at the ground.  Can I explain how my legs still hurt 3 days later.  TOO much bending over at the waist!!  He would pile it up in his cart and take it to his “spot” in the woods where he piles brush. Nature takes care of the composting and over the years, our cuttings have made great beds for the rabbits and the deer that frequent our back acres.  Once all the cutting was finished, he uses his mulching mower and cuts away any stalks that stick out above the ground level, and mulches up all those “leaves” the bamboo has left behind.  He has been working hard at finding the big runners that have crossed under his gravel driveway, digging them out.  This little area we cleared doesn’t look like much, and he will spray it with ground clear for the next 2 years to kill off any other sprouts that might pop up.  Then, and only then will he try to plant some grass back in the spot, and hope the bamboo doesn’t return. 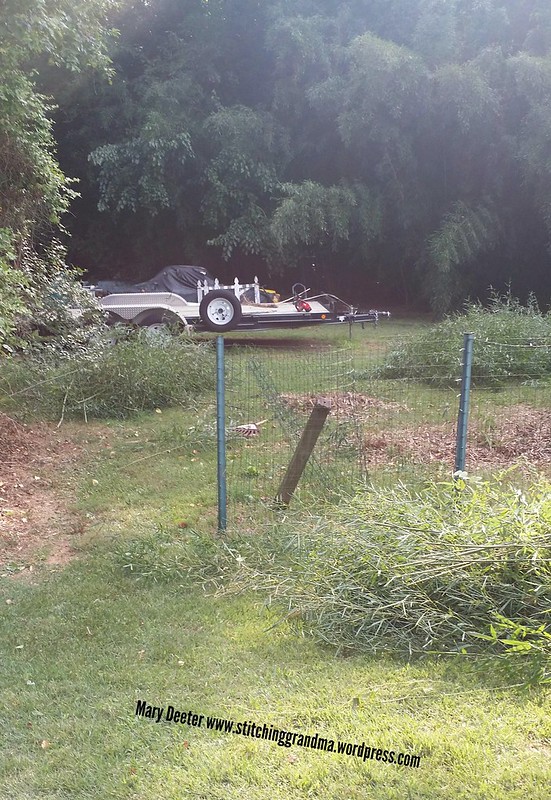 Yes, those are pile of cut bamboo stacked up in the foreground, and in the background all that you see is mostly bamboo, mixed in with the hardwood trees.  We were hoping the tree canopy would prevent the bamboo from growing, but the bamboo just keeps getting taller and taller.  Some of those stalks are 30 foot or more high.  What a pain!

NOW you can see why I was happy to escape back upstairs to my sewing room in the rain on Monday!

Tuesday morning I took another long bike ride with my daughter and granddaughter. What a relief to escape the yard work! We got out early before the rain!  We biked from 9 until noon, a total of 6 miles, with stops at the nature center to see the fish and at the playground to let the littlest person run off some energy.  Much more fun than cutting bamboo.  Don’t think the back of my legs was ready for another 4 hours of work in the yard.  We have been bike riding now together 3 or 4 times, 6-8 miles each time.  Turns out, I really enjoy the diversion, the exercise and of course, the company.  Once a week has been our goal together.  Of course, she is working on me to invest in a newer, lighter weight, more efficient bike. This antique I ride was her older sisters bike all thru school, and she is having her 20th class reunion this year.  Maybe a 21st century bike is in order.  Pondering….. 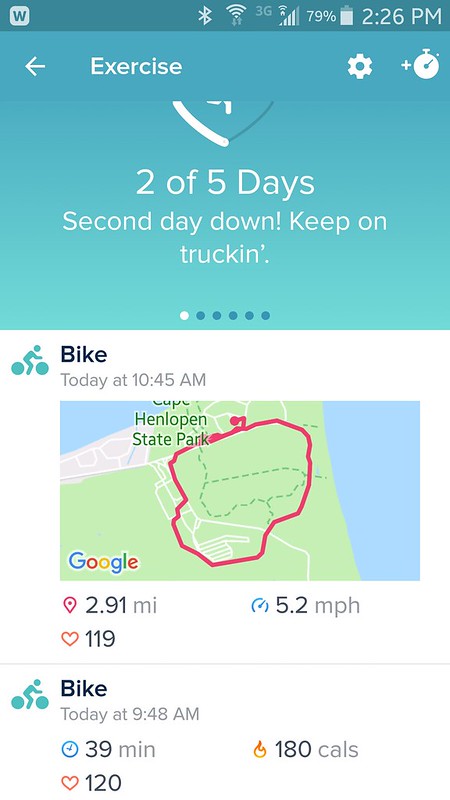 When I came home, I saw the hubby was occupied writing an article for his model railroad club newsletter, so I spent the rest of the afternoon and early evening in my sewing room. I told him I was held captive in the garage by a rain shower!  (Good excuse for an 8 pm supper!)

Remember those placemats?  Well, I made MORE.  I got the 4 additional ones finished, and had my 12 I wanted.  And then, well…just kept sewing.  We are up to 18 now.  I am starting to think about how to back them.  Since these are totally scrap happy, I wonder if having a plain muslin back would make sense?  I have LOTS of muslin thanks to Dottie L. at church.  Going to consider that….while I prepare some “scraps of batting” for these.  I was happy to use some of the batik scraps my friend Nancy B saved out for me to give some more bright colors to the last 6. 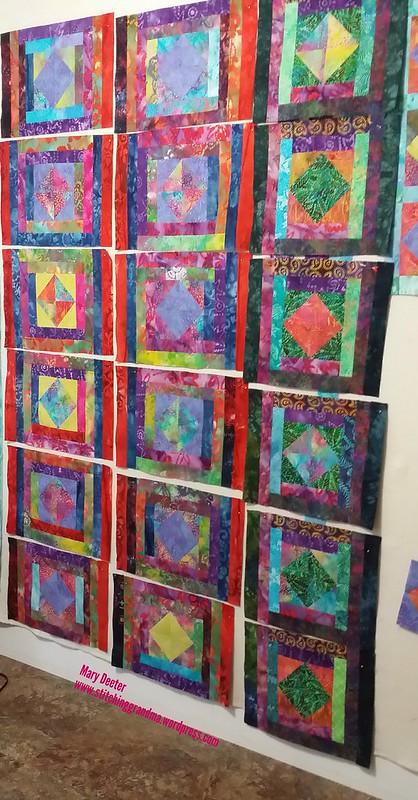 I still have 6 blocks left and miles of batik strips, so I am certain there are more to be made.  Maybe I will mix them all up, and dole them out in groups of 6 for gifts, and just keep the table runner for myself.  I really have had fun playing in the batiks.  (Much more fun than yardwork!)  Off to the sewing room…..shhh…don’t tell the hubby the sun is shining!

What are you doing for fun this summer???  Do you have some of those never ending tasks that you hate to work on??  How do you balance things?

EDIT to add some hashtags (because I just learned about them…)