June is almost over!  I can’t believe how fast it has gone by!  We jumped right into summer after Memorial Day with hot weather!  Air conditioning on, windows closed, pool opened.  Sort of….

I have a funny story about our swimming pool.  We have used a non-chlorine product called Baquacil in our pool since it was installed in 2010.  Hubby had always used that product in an above ground pool prior to the in-ground pool going in.  I had a pool at my previous home and for 16 years, always used Chlorine products.  So, when Hubby & I  got married over 10  years ago, we started discussing the pros and cons of pool systems.  We have been debating the good/bad/ugly of these types of products and the Hubby won the battles of pool products…..for a while.

4 years ago, our local pool store suggested “adding” a product to the water that was a “one-time” thing called Endure – a borax based chemical, that was supposed to “enhance” the other products and keep us from constantly adding chemicals …blah blah blah.  Well….it was a giant fail!  I won’t go into the details, just know that the manufacturer’s product rep and I spent all of July and August on the phone that summer, and our pool was one problem after another.  (This ended my trust of the local pool store too).  From that year forward, we have battled with our pool every summer. The end of that story is that the Endure and the Baquacil were incompatible, and the chemical reactions to each other really were ugly. (And expensive beyond reason!)

Last year, I had “had enough” of the big chemistry set in the back yard.  Swimming pools are supposed to be relaxing, right? My one daughter (the science teacher) and her hubby had converted their chlorine pool to a salt water pool, and the more we discussed it, the more my Hubby began to see the “light of day” or the “cool blue pool”.  Salt is supposed to be easier on your skin, less chemicals etc, the very reason he liked the Baquacil…..but much less expensive to run annually.  Initial start up with the purchase of the equipment not cheap, but ideally, it will “pay for itself” in 2 years.

So, fast forward to June 2017 and we FINALLY made the switch. Equipment was purchased in the spring, plumbing bits and pieces acquired,  electronic controller mounted and wired….and you would think – ready to go….well…not so much.

The “switch” from a chlorine to a salt pool is simple. The “switch” from a Baquacil pool to salt…….like everything else…not so easy.  You see…the premise is…a salt water pool has a “chlorine generator” …. “A salt-chlorine generator uses the simple process of electrolysis in combination with the water to separate the chlorine and sodium molecules and then reintroduces them into the pool as liquid chlorine. ” info from-   https://pinchapenny.com/info/salt-pool-basics

We knew diving in, that it would be complicated. We had prepared last fall by the way we closed the pool.  NO Baquacil in the closing process….ok, I started to trust the pool store again!  We added “non chlorine shock” in the fall; again in January and April, in order to eliminate any residual Baquacil in the water.  But, when we wanted to turn on our salt system, we still had “too much” of the Baquacil in the  pool.  We had 27 PPM of Baquacil sanitizer, and the goal was 0 PPM.  Early in June the “experts” at the local pool store had us use “non chlorine shock” just like we did over the winter and at closing last year.

We did that and were able to reduce to only 21 PPM.  The pool was crystal clear, but, after doing that for 2 weeks we still could not make the switch.  So, another water sample to the “experts” at the pool store.  The “experts”  said we “think” the only way to get it moving quickly was to introduce chlorine into the water. (The alternative was to continue using non-chlorine shock until the Baquacil stabilizer dissipated over the summer).

Chlorine shock would make a chemical bond with the Baquacil.  Oh, they also told me that I should enjoy the reaction.  Trust me, I took photos.  We had a crystal clear blue pool and the first sprinkle of chlorine turned the pool LIME green.  (I was REALLY glad they warned me it would happen the way it did!) 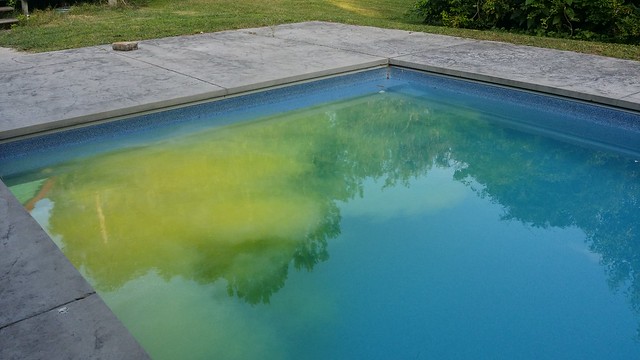 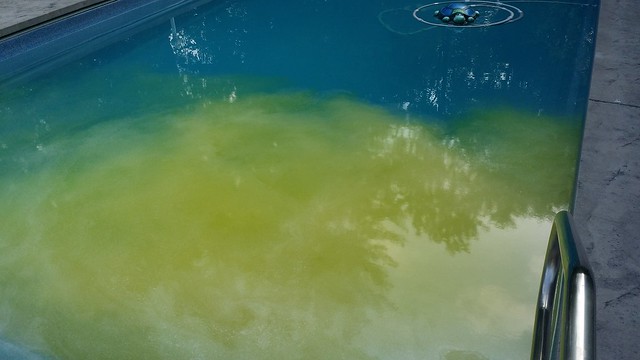 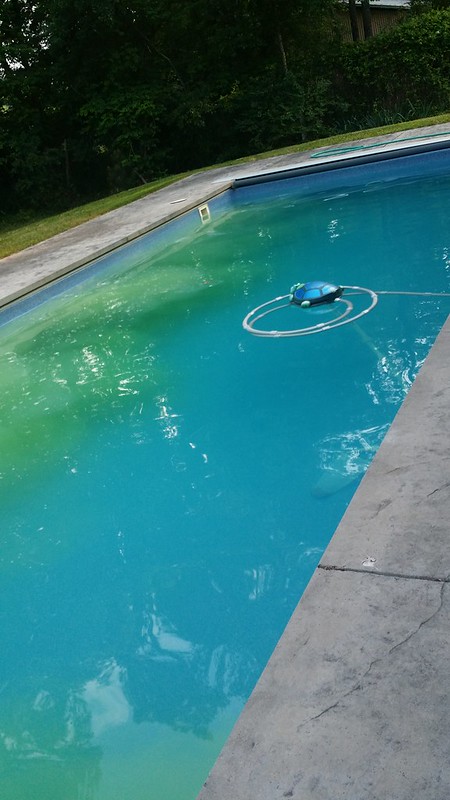 Now, this was a bit of  a scary experiment, because I was not convinced we would have a pool this summer!!  However, as I read and read online forums, and knew eventually it would sort itself out. (This was a good read –Tired of Baquacil ) (And this – Pool Spa Forum ).  At one point in the last few weeks Hubby and I were CONVINCED this was going to be our daily routine all summer.

Watching the transition became our daily fun.  Basically, the chlorine acted like little PAC-MAN, eating up the Baquacil.  We spent 3 weeks, putting chlorine (3# at a time) into the pool in the evening.  It would “bloom lime green” ; and by morning, it was crystal clear and blue again.  The little chunks of Baquacil would get swept up by the turtle, and we would empty his bag.  Whatever went through the filter got back washed out every day.  (Sometimes 2 or 3 times a day near the end of the process.)

Comment – we did determine that the chlorine shock from the pool store was a better investment than the stuff we picked up at Walmart for 1/2 the price.  The pool store product was a much higher percentage of actual chlorine, and it dissolved much better than the stuff at Walmart.  We figured we were “saving money” but it ended up not worth the savings. (So, that said, if you are buying shock at the local pool store, overall you are saving money because you are getting a better bang for your buck!)  I think that using the cheaper product slowed us down some.  Several forums direct you to use straight out of the bottle chlorine bleach from the laundry aisle, but I was not sure I wanted to take that route. I stuck to official pool chemicals.

Each morning, the water was sparkling blue and swimmable. Each time we added the chlorine, the transition time from lime green to blue shortened.

On Monday, it cleared within a few minutes, and on Tuesday, there was little change in color at all. The last step was to “clean the sand filter” (more chemicals) and I did that overnight on Tuesday.

Wednesday morning, the filter was clean and we were READY!  The Hubby switched out the plumbing parts, installed the “cell”; and plugged in the business ends of things and flipped the switch.  He set the electronic controls, and we were ready to go.

Oh, I forgot….FIRST someone had to put 480 POUNDS of salt in the pool …. Those 40# bags just about wore out my arms.  (Ice on elbow all evening last night for me…..) I loaded them on a little hand cart and pushed it along the edge of the pool and cut the bags open one at a time and let the salt “sprinkle” into the pool like a salt shaker !  It dissolved quickly and if there was a bit of a pile in the pool, our little turtle floating around would “sweep by” and stir it up and help it to dissipate.

As the cell was switched on we had a little clouding initially, but it seemed to clear up quickly.  One bottle of “stabilizer” was added, and hopefully that will be it for us!  Of course, we have to monitor like we always did, keeping the various levels right (PH, Alkalinity, Hardness etc).  I will take a water sample in for an “official” test to make sure we are “RIGHT”, and our test strips are giving results that match up with the pool store.

Overall, it has taken us 25 days to make the switch.  I think I could have shaved a week off had I not bothered with the cheaper product midway in the transition. (I was trying also to avoid the 30 mile round trip to the pool store…..).

I think it looks pretty good this morning!  Day 1 of the Salt water pool 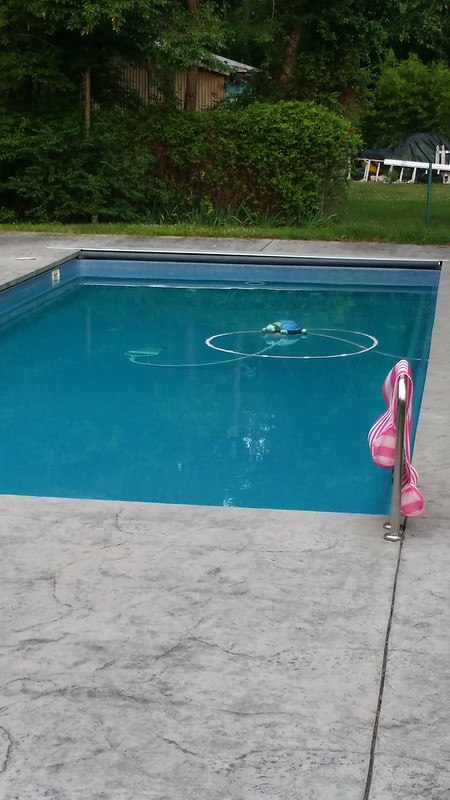 Day 1 of the Salt water pool  — Crystal clear, sparkling  and ready to swim.

Note – the turtle (Polaris Turbo Turtle) floats on top, runs off of a Polaris fitting we have on the side of the pool, powered by a  water line return. He skims the bottom and sides of the pool and I empty his little mesh bag every day.  Saves us from vacuuming the pool.  His name is Earl, our pool  butler!  Between Earl, and the salt system, I am hoping for hot sunny days of relaxing in the pool, in a lounger with a book.

How do you plan to spend your summer ?

PS….Hubby needs to spend his doing some serious yard work……right after he gets over his run of bronchitis.  I can dream of those relaxing hours, right after I finish getting my quilts ready for the show and the last of the 2nd Time Around donations priced and boxed up for the show. ….  wait…another shameless promo –

“Peach Blossom – Quilts in the Orchard”

over 300 quilts; vendors, nationally know speakers and classes….and of course my 7 tables of 2nd Time Around !!