I mailed a package off last week and have been WAITING for it to be delivered and OPENED.  I sent 2 gifts in the box; one for my son-in-law who must WAIT for Christmas. The other was for my daughter, and I gave her “permission” to open on arrival!  (Selfish me wanted to post photo’s and blog about it!). Seriously, it was something she could use NOW for her holiday table.  (That’s my story anyway!)

You remember the Autumn Jubilee pumpkin/autumn leaves table runners I have been making ?    I asked her if she was interested in one, and she said yes.  Then, she tossed a design idea at me.  She asked for a “double sided” table runner. A “two season, I don’t want to store a bunch of stuff” request.  I thought that seemed like a good idea (and this is why I consult her frequently).   I  played around with the pumpkins and leaves and came up with this for the Autumn Jubilee side — 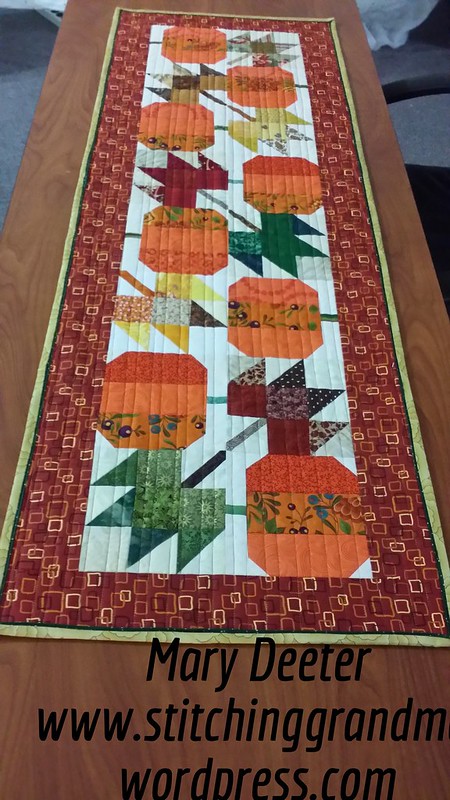 I picked that border fabric on the Autumn side because I thought it had a more “modern” feel….not too “country” looking.

The “flip side”  is for Christmas — 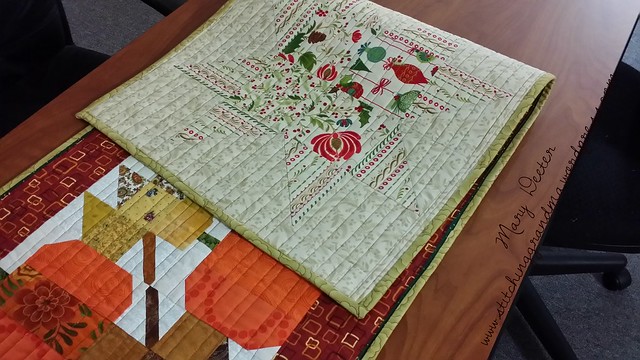 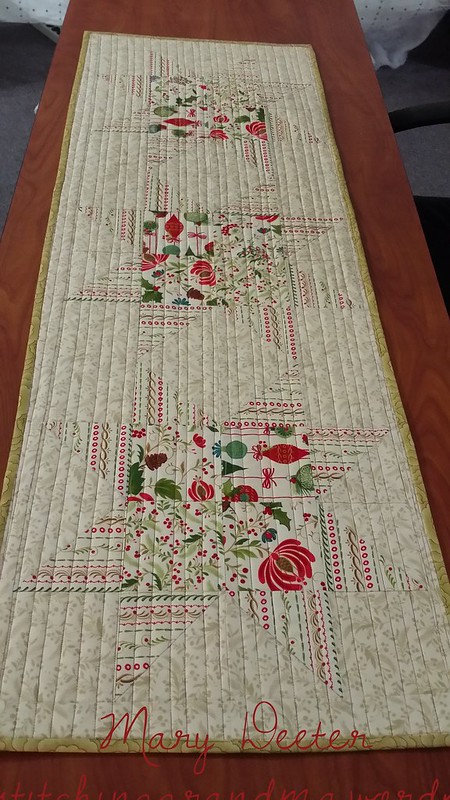 It looks much better on her dining table than on my little workshop table. 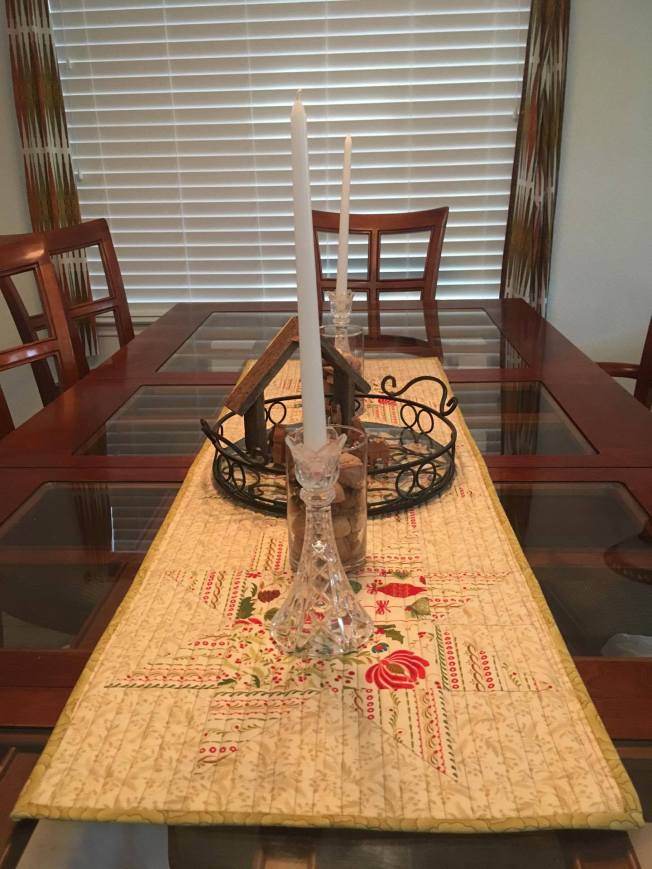 I used the same fabric and star pattern for this table runner as I did for her Christmas Pillow covers I made last year.  I wrote a detailed post about them here – Star Pillows .

Thanks to all the great people who blog and write patterns and share them.  The Autumn Jubilee is inspired by Carole  on her blog- From My Carolina Home .  The Star Pillow is from a pattern by Melissa Mortenson http://www.polkadotchair.com/2014/02/patchwork-quilted-pillows.html/

The soft gold binding in my “Susie’s Magic Binding” was inspired by my hubby! I was struggling to find a binding that would work for both sides; and he suggested the soft gold that is prevalent in the star and on the background fabric.  Of course it worked well on the Autumn Jubilee side too!  (I’ve written previous posts about Susie’s Magic Binding  https://stitchinggrandma.wordpress.com/2015/11/20/binding-and-other-projects/  if you want more info.)

I quilted using a walking foot and did variable widths of straight line quilting. I used Superior Thread 40 weight – CASHMERE – Fantastico 5035  .  Nobody is paying me to say this – I LOVE THAT THREAD.  I just opened my second spool.  That is, the 2nd  2000 yard spool!  The colors in this variegated thread blend with so many things. I highly recommend it. It was my bobbin thread as well.   The transitions in the colors are subtle, and it really is a pleasure to use that thread.  Anyway, with the quilting being rather dense, I think it gives “weight” to the runner and helps it lay flat on the table. (Even in the last photo, after it had been folded up for several days in the mail.)

I am very pleased with the outcome of this project.  Of course, I have more “pumpkin/leaf & star  parts” available, so I may make myself a Christmas runner at some point. I still have some more placemats to work on as well…but those are for autumn and Christmas is coming!

What are you working on ??  Any secret projects you can reveal yet?  Happy Stitching!  Don’t let the deadlines spoil your joy!

Update — Linked up to Oh Scrap!!   The Oh Scrap  button is also on the side of my blog!

12 thoughts on “A package delivered”