Hello again, for the 3rd time in as many days!  I must report that I got the last bit taken care of for Project # 3 – June’s Quilt.

The back story – my dear friend June started this project from a kit 10 or 15  years ago.  She was given the kit as a gift by her daughter.  3 years ago, after her daughter died suddenly, June pulled this partially completed project out of the closet and showed it to me.  The center panel and the 9 patches were assembled. The fabric line had a lovely border available way back when, but she didn’t get it 10 or 15 years ago.  When she found it, she was unable to get the “green” color way, and for some reason ended up with the border fabric in blue.  She asked me to help her “pick out” new border fabric.  At the time, (2013), we shopped and she chose a green fabric that reminded me of “hospital scrubs”.  It was “really flat” in my opinion.  She wanted something to go with the center panel, and it was the best she could find.  It was what she wanted, and that was that.  Every once in a while, I would ask how she was making out on the project, and she would say, she was still “thinking about it”.

Last fall (Sept 2015), she handed me the entire project in a bag and asked me if I could please “finish it for her”.  At 82, and still full of grief, June didn’t think she could manage it on her own.  So I took on the project.  I’ve been working on it, in and around other projects.  Once I got the first two rounds of borders on, (purple and fuschia) I had to sit down with her, and get a better idea of what she wanted.  In October, I was in Lancaster Co. PA and I had swatches of her fabrics with me and picked up a “different” green for the border.  I bought P & B BELLA SUEDE LEAF TEXTURE – MINT; as it had some depth and texture to the pattern vs the “flat green” that looked like scrubs.

June wanted a quilt that would have a 20″ drop down the side of the bed.  She currently has a “stack & whack” quilt that was hand quilted by an Amish lady. It has a tuck under for the pillow and a pleated corner.  Given my limited skills, I told her I could make it with borders to giver her the drop she was after, but I wasn’t going to attempt the pleated corner.  I had to do some convincing to get her to agree that it needed the same border on all 4 sides.  That border at the top will tuck under and over the pillows.  I took it to her last week, showed her how it would look without that top border.  I also made 3 pillowcases for her with that “flat green” fabric and some extra bits and pieces of the leftover fabrics.  I’m glad she agreed to the border for the top, as I had already ordered the additional fabric that I needed!!  I gave her the pillowcases, made with her fabric, for her 83rd birthday.  I made her promise she would use them and NOT hide them in the cupboard. (She has a way of doing that with things that are new…saving them…)

The new fabric arrived the middle of the week, and once I got Project # 1  and project # 2 done, I got busy with this one.  The final border is on,  and I will be sending it out to my dear sister-in-law, Carolyn for long arm quilting.  But first I need to order some batting (king size); and 4 yards of 108″ wide backing. Another trip to Lancaster Co. PA is planned in 2 weeks, so I hope I can find something that will suit me at Weaver’s Dry Goods in Lititz PA.  When I was there in May I was “window shopping” backing fabric, but didn’t buy any.    I did find something I liked on Marshall Dry Goods website.  They have an extensive selection of wide backing for under $10/yard.  I need to get backing for Project # 1 also while I am there, along with border fabric for my  Allietare .  (I figured out that I don’t L O V E the border fabric I bought, so will try again while I am at Weaver’s.) 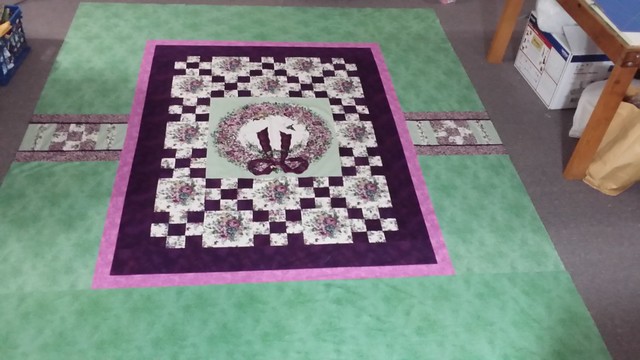 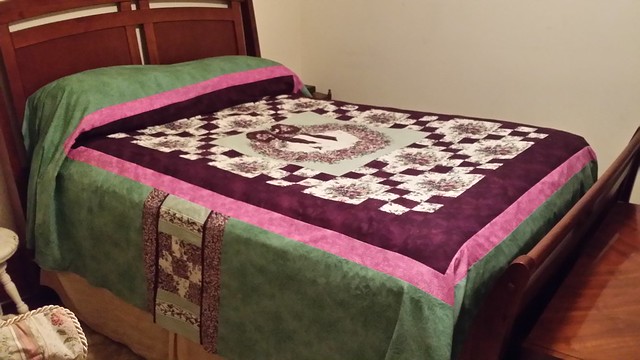 It seems huge, but when we put it on the queen sized bed in our guest room, it works.  June’s bed isn’t as high as ours, and once it is quilted and bound, it will not hit the floor.  Those pieces inset on the sides are “extra blocks” that June had made.  I had a little fun working them into the project. She was really pleased with the way they came out.  And while it is off to Carolyn’s for quilting, I can make the binding.  I have enough of the fuschia and green to do some “binding with a flange”  also known as “Susie’s Magic binding”.

And, speaking of binding, while I am at it, I will be making the binding for Addison’s quilt (Project # 2).   I spent a little time “playing” with EQ7 today, watching the video tutorials once I got it installed in my quilt room computer.  I want to do a pieced backing for Addison’s quilt, and am hoping to get busy with that project later this week.  Once Addison’s backing is made, it will be time to “layer & quilt”.  Hoping to get the backing done this week, so I can get it layered up on the 13th when my Sit N Sew group meets at church.

So, soon, very soon, I can get on to my Pet Mosaic Project from my retreat last month.  It is a “slow mover”, as there is a huge amount of design work to do, but I really want to “get back to it”.  It will live on the design wall for a while!  You can “check out” the photo album here –  Pet Mosaic Photos on FLICKR

It feels like I have made significant progress this past week on several LARGE projects.  Too bad not one of them is on either “UFO list” that I have!  Oh heck, I will have to dig one of those other PIGS out of the sack in the next few days too.  🙂

Have a great Independance Day!